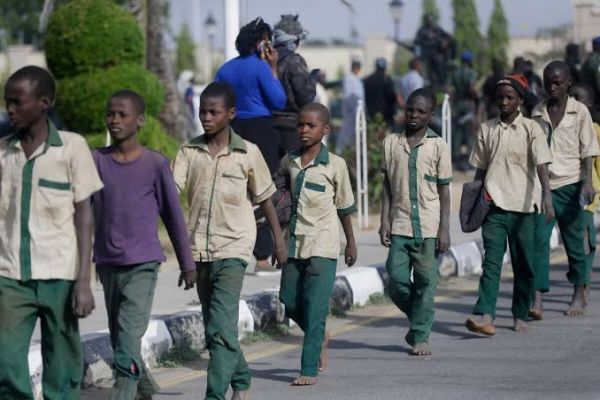 There has never been a more trying time to be Nigerian.

That sounds cliched, but there are simply no words to convey Nigerians’ horror at the endless cycle of national grief. Our country has so far been spared the worst of the Covid-19 pandemic, but extremist violence, communal clashes and rising criminality are producing an epidemic of insecurity.

The latest alarming trend is a wave of mass kidnappings of students, endangering millions of children’s futures. At the end of May, dozens of kidnappers on motorcycles stormed a school in north-central Nigeria and whisked away 136 children aged 5 to 14 and three teachers, after killing one person. Two mothers collapsed and died upon receiving the news. The kidnappers have demanded 200 million naira (almost $500,000) for their young victims’ lives.

This follows the seizure in December of 344 schoolboys in the northwest of the country from their dormitories. Their release after six agonizing nights evoked a collective sigh of relief from a nation sunk in sadness and anger.

The episodes conjured disgusting memories of the April 2014 abduction of 276 schoolgirlsfrom their school dormitory in the northeast town of Chibok. At the time, the mass kidnapping shook Nigerians to the core and triggered international outrage and activism. More than 100 girls remain in the brutal grip of Boko Haram, an Islamist militant group that has been involved in the killing of an estimated 40,000 and displaced more than 3 million.

Thus began a phenomenon that has become the new normal — and has kept getting worse. Criminal gangs in the northwest have killed more than 8,000 people in the past decade. Since December, more than 800 students and their teachers have been abducted in six incidents spanning four states. Heavily armed men would break into public boarding schools, shooting sporadically, and march the students into dark forests. Victims are held in inhumane conditions and freed after days or weeks upon the payment of ransom.

The situation is even worse than coverage suggests. For every incident that makes headlines, many more involving fewer children or groups that do not fit a media narrative go unnoticed. Kidnap-for-ransom is a daily phenomenon that is rapidly becoming Nigeria’s most thriving industry, earning perpetrators huge sums in an economy reeling from the pandemic downturn. To pay ransoms, ordinary Nigerians must liquidate their businesses, sell homes and farmlands or incur huge debts. Communities have formed vigilante groups to defend themselves, but the criminals have greater firepower.

The impacts exceed the initial human and financial costs. Freed children receive inadequate psychosocial support or none at all. According to Amnesty International, more than 600 schools have closed since 2014 over safety concerns, while the federal education ministry reports that the number of out-of-school children rose by over 3 million to more than 10 million in the first quarter of this year.

For some girls, this is the end of the road — they are married off during the school closures by parents who have always regarded education as an inconvenience. Even where schools remain open, fear and apprehension impact effective teaching and learning. Nigerian children, struggling to catch up from Covid-19 lockdowns, lag even further, risking a lost generation.

What is behind the rise of Nigeria’s kidnapping industry? With culprits almost never arrested and prosecuted, it has dawned on criminals that crime pays, and children’s innate defenselessness and the presence of public schools in old, insecure buildings on the outskirts of towns leaves them exposed. While holding poor schoolchildren for ransom seems counterintuitive, gangs have realized that it puts ruling politicians under pressure, enabling culprits to cash out big from government payments. Furthermore, Islamist militants’ recent inroad into the northwest and north-central of the country, and Boko Haram’s claimed involvement in the December kidnapping, mean there could be ideological motivations.

Despite repeated promises to control the situation, the government’s efforts are falling short. Around 350,000 police officers, a significant portion of whom are permanently attached to politicians as personal guards, struggle to defend themselves. The military is also thinly spread in active deployment to at least 30 of the country’s 36 states — the definition of a nation at war with itself without formal declaration. Both face basic logistical challenges amid credible allegations of corruption.

Lacking federal leadership, state governors pursue inconsistent, even contradictory, approaches. Some states pay ransoms in cash, some families crowdfund ransoms, all while security and intelligence agencies — some of whose officers have themselves paid ransoms— look away. Repugnant criminal groups essentially control many parts of rural Nigeria and its highways and may soon encroach on towns and cities. To say the situation is dire would be an understatement, and matters could get even worse.

Crushing the kidnap-for-ransom industry requires making it unviable. But government’s recent attempt to legislate a solution by criminalizing ransom payment will not work. Until Nigerians feel able to not pay, victims’ families will feel morally obligated to violate such a law, and a government whose failure exacerbated the situation will lack the moral authority to enforce it. To criminalize poor parents desperate to save loved ones, while kidnappers operate with impunity, would be utterly appalling.