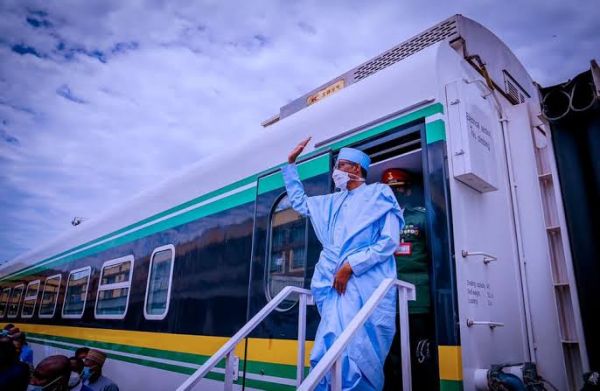 Buhari described the project “as another milestone in the drive of this administration to revitalise the railway system and establish it as a choice mode of transportation for both passengers and freight.”

In a statement by Femi Adesina, presidential spokesman, on Thursday, said the rail line was established to reduce traffic on the heavily congested Lagos–Ibadan highway.

At the inauguration, Buhari pledged that his administration will prioritise the railway system as a transportation backbone that can transform industrial and economic activity in the country.

“This vital line establishes an end-to-end logistic supply chain in railway transport within its short corridor, Lagos–Ibadan, as goods to the hinterland would now be transported by rail directly from the Apapa port Quayside straight to the Inland Container Depot located in Ibadan from where it can be distributed to other parts of the country,” he said.

“In clear recognition of the challenges posed to our economic growth by the absence of strong and effective infrastructure, we have in the rail sector, further to other ongoing railway infrastructure projects, embarked on the completion of the outstanding segment of the Lagos – Kano railway, which is Ibadan–Kano.

“The Lagos–Kano railway project when completed will link the Kano–Maradi line at Kano and a rail link from the Nigeria southern ports of Lagos to Maradi in the Niger Republic will be achieved.

“The connection through rail would position Nigerian ports as the choice for import and export business of the people of landlocked Niger Republic.

“This would be beneficial to the economy through employment from new business opportunities and wealth creation.”

Buhari further noted that the Ibadan-Kano project would have a connection to the Tin Can Island port as well as the West–East Coastal rail line from Lagos to Calabar linking Onitsha, Benin, Warri, Yenagoa, Port Harcourt, Aba and Uyo.

During his short visit to the state, Buhari also inaugurated the handing over of newly-acquired security equipment and assets donated to Lagos state police command, by Babajide Sanwo-Olu, the state governor, on behalf of the Lagos State Security Trust Fund.

In his address, the president noted that his administration has remained committed to the development of police force.

He said: “Indeed, no Federal Government since 1999 has been as committed as our administration, to reforming and repositioning the Nigeria Police Force and national policing architecture.

“There is no doubt that these new equipment being handed over today will go a long way in boosting the morale of the Police, and further enhance their capacity to fight crime and combat criminality.

“This is even more touching in the light of the unwarranted violence that ensued in the wake of the #EndSARS protests last October, which saw the security architecture in Lagos state being severely damaged.

“It is commendable that Lagos State, the Centre of Excellence, has shown a truly resilient spirit, in the face of the massive destruction it suffered last October.

“You did not allow yourselves to be deterred by the severe setback; instead you have bounced back and are now boldly rebuilding the confidence of residents and investors in the State.”

In 2019, Buhari inaugurated some projects including the Institute of Maternal and Child Health at Ayinke House; an ultra-modern 170-bed Obstetrics and gynaecology specialist hospital located within the Lagos State University Teaching Hospital and Lagos Theatre at Oregun, Lagos.