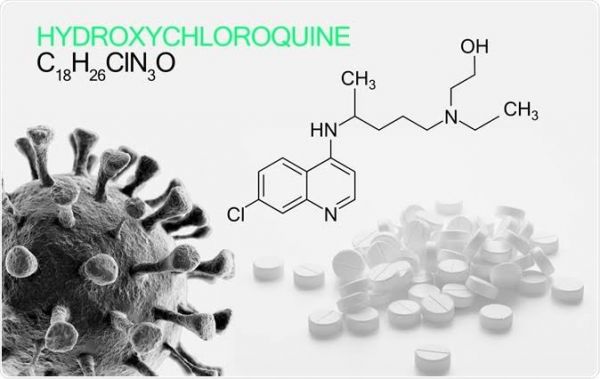 The resulting report, out May 31, found hydroxychloroquine to be effective

The drug, when used in a high dose and with zinc, increased survival rates

As president, Trump touted hydroxychloroquine as a preventative treatment

He even took it himself, despite doctors then warning it could be dangerous

A malaria drug which Donald Trump was condemned for hailing as a possible COVID-19 treatment can increase survival rates by up to 200 per cent, scientists say.

Scientists found that, when ventilated patients with a severe version of Covid were given high doses of hydroxychloroquine with zinc, their survival rates could increase dramatically.

Trump said in March 2020 he was taking it to prevent him catching the virus, rather than treat it. He did not become infected until October, and was not treated with the drug.

The former president had previously touted hydroxy as a potential miracle treatment, with scientists lining up to insist he was wrong to do so.

Yet Trump's allies on Wednesday were highlighting the study, conducted by Saint Barnabas Medical Center in New Jersey on 255 patients.

It was published on May 31 on the medical site medRxiv.

His son, Donald Trump Jr, said: 'In the last week alone, we've learned that the media, so-called fact checkers and their Big Tech enforcers lied to us about the lab-leak theory, Hydroxychloroquine and the clearing of Lafayette Square.

'All to hurt Donald Trump.

'What else are they lying about?'

'Trump was right.' The former president has been banned from all major social media platforms, and has yet to issue his own statement about the new findings.

In April 2020, Trump declared: 'We bought a tremendous amount of hydroxychloroquine, which I think is, you know, it's a great malaria drug.

'It's worked unbelievably, it's a powerful drug on malaria. And there are signs that it works on [coronavirus], some very strong signs.

'And in the meantime, it's been around a long time, and also works very powerfully on lupus. So there are some very strong, powerful signs, and we'll have to see.

'Because again, it's being tested now, this is a new thing that just happened to us, the invisible enemy, we call it.'

He continued: 'It's a very strong, powerful medicine, but it doesn't kill people. We have some very good results and some very good tests. You've seen the same test that I have.

'In France, they had a very good test. But we don't have time to go and say, gee, let's take a couple of years and test it out. And let's go and test with the test tubes and the laboratories.

A month later, on May 28, 2020, he shocked attendees during a roundtable event at the White House by saying: 'I happen to be taking it.

He added: 'I'm taking it, hydroxychloroquine. Right now, yeah. Couple of weeks ago, I started taking it. Cause I think it's good, I've heard a lot of good stories.'

White House physician Dr. Sean Conley released a memo that evening, which said that after discussing evidence for and against hydroxychloroquine with Trump, they concluded 'the potential benefit from treatment outweighed the relative risks.'

Trump's support of the unproven drug was described by critics as reckless and dangerous at the time. He caught Covid in October, and was admitted to Walter Reed Medical Center after struggling to breathe, but later recovered after receiving a then-experimental antibody therapy.

Last summer, Twitter restricted the account of Trump Jr after he posted a video of doctors touting the effectiveness of the drug. The social media platform accused him of 'spreading misleading and potentially harmful misinformation' related to the coronavirus.

In March of this year, the World Health Organization warned against using the drug to prevent the coronavirus, citing data suggesting it was ineffective.

Yet the authors of the new report state: 'We found that when the cumulative doses of two drugs, HCQ and AZM, were above a certain level, patients had a survival rate 2.9 times the other patients.

Hydroxychloroquine is still an unproven drug for Covid treatment.

Early in the pandemic, Anthony Fauci, the nation's top public health expert, expressed interest in the drug, but he maintained that more data was needed to prove its efficacy.

Fauci's emailed comments on hydroxychloroquine line up with what he said in public and the scientific consensus about the drug.

Republican critics, however, accuse him of secretly supporting the drug - although there is no evidence to prove it.

Several other studies in recent months, after Fauci's email, have found that hydroxychloroquine can be effective in certain situations.

A December study from the International Journal of Antimicrobial Agents showed 84 per cent fewer hospitalizations among patients treated with the drug, and a January study, conducted by Hackensack Meridian Health, found encouraging results in patients with mild symptoms who were treated with the drug.