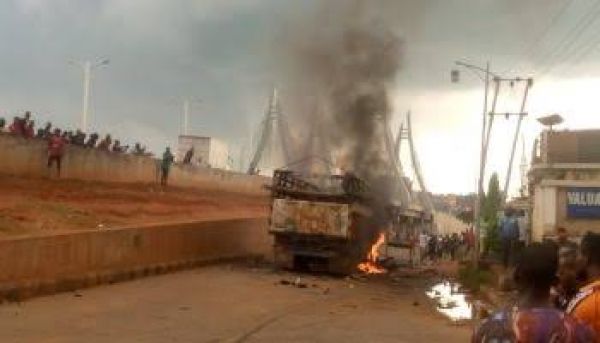 Two persons were shot dead on Sunday when their cattle-laden lorry was attacked in Oba, Idemili South Local Government Area of Anambra state.

The driver, Abdulmumini Musa, and his conductor, Garba Yusuf, were en route from northeastern Bauchi State to Owerri when they were attacked in Oba, near Onitsha, one of the biggest centres of commerce in Nigeria’s south, our sources said.

Disturbing photographs reviewed by PREMIUM TIMES show apparent bullet holes on the chests of the victims. Some of the photographs are too gory and cannot be published.

The police have not blamed anybody or group for the attack. A local police officer detailed to work on the matter said “investigation has begun” and the spokesperson for the police in Anambra, Ikenga Tochukwu, said he had not been briefed Monday afternoon.

Armed militants belonging to the separatist Eastern Security Network have been operating in Nigeria’s Southeast, including Anambra State, and have been blamed for the rising attacks on INEC offices, Nigerian security facilities and personnel, and innocent civilians, including Nigerians from the North of the country.

The proscribed Indigenous People of Biafra, IPOB, which formed ESN last year, repeatedly denies involvement in these attacks. But their leader, Nnamdi Kanu, has repeatedly appeared in broadcasts and leaked audios issuing attack orders and firing incendiary remarks at Abuja and Northern Nigerians.

Also, the police said gunmen arrested following repelled attacks or during raids of camps have admitted to being ESN operatives.

Sources that witnessed the Sunday attack in Oba said it was the appearance of the military personnel that stopped the assailants from burning the lorry after they killed the driver and the conductor and enabled the stealing of the cows.

“Four cows have been recovered,” one person in the Hausa community told our correspondent but asked to remain anonymous so as not to hurt his cooperation with the police over the case.

Remains of the victims were taken to the Hausa Quarters, Cable Point, Asaba, in Delta State, for burial.

Oba was where six children, all under 10, belonging to a Fulani family, were killed in February.