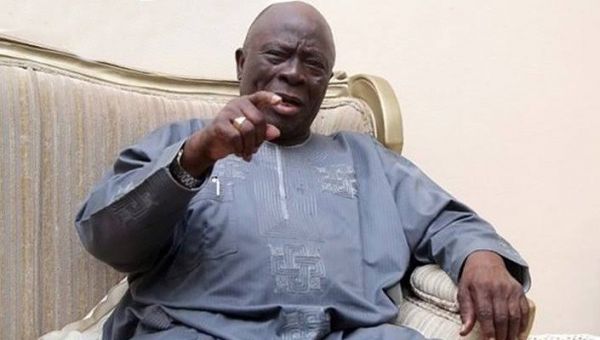 Pan-Yoruba socio-political group, Afenifere, has berated the Federal Government, saying the unwarranted, unprovoked, dastardly and avoidable killings and arson that took place in Igangan, Ibarapa area of Oyo State on Sunday, has removed the doubts that Nigeria is literally a battlefield and a progressively failing state.

The organisation, while reacting to the killings and burning of properties that occurred in the community in a statement by its Leader, Ayo Adebanjo, and issued by the National Publicity Secretary, Jare Ajayi, regretted that the incident could still happen in spite of the alarm sounded by the Chairman of the Oyo State Security Network code-named Amotekun, Kunle Togun.

Togun last Thursday alerted the nation of the imminent invasion of the Southwest by armed bandits from some West African countries.

During the attack on Igangan, it was reported that about 50 fully armed bandits arrived the community at about 11 pm on Saturday night and operated till around 3.00 Sunday morning.

And by the time they were leaving, more than 20 people were allegedly killed while several houses, a fuel station and vehicles were burnt down.

The palace of the traditional ruler of the town, Asigangan of Igangan, was not spared either.

Afenifere however said a more serious government would have from the moment the security alarm was blown by Togun swung into action to ensure that such a gory incident did not happen anywhere.

“The failure of the Federal Government controlled security apparatuses to prevent the carnage from happening, despite prior warning, makes it difficult for us to dismiss the insinuations in some quarters of complicity from the high level of government. This suspicion is strengthened by the fact that the devilish bandits operated for four solid hours without being checked by either the police or the military. It is so sad”, it said.

The organisation observed that  security report indicated that a column of the armed bandits were spotted in Iwere-Ile, Iwajowa local government area in Oke ogun, Oyo State, but they were repelled by the combined team of Amotekun and Vigilante officers in conjunction with the local people, stating that

suspicion was rife that it was those bandits and/or their partners-in-crime that attacked Igangan.

Afenifere then called on federal and state governments to urgently put an end to the deteriorating situation in the country “before the people resort to self-help”.

It added that while the security agencies should quickly swing into action, the federal government should as a matter of urgency convoke meetings of security experts and make it possible for local communities to protect themselves.

"To find a lasting solution to the myriad of problems confronting the nation however, Nigeria must be restructured immediately. The Igangan murderous debacle further emphasises the urgency and immediacy of state police. And state governors should be Constitutionally empowered for the security of their states in all ramifications as chief security officers of their respective states", it stated.