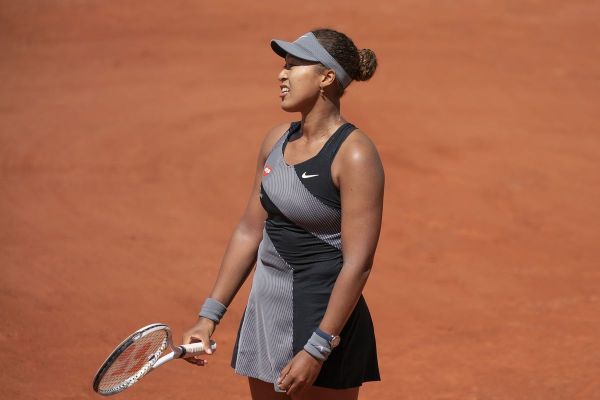 Citing mental health concerns, tennis superstar Naomi Osaka refused to attend post-press conferences. If you ran the French Open, what would you have done?

Naomi Osaka, the world's second-ranked women's tennis player, said she would not attend press conferences while playing in the French Open, citing their disregard for athletes' mental health during press conferences, especially after a loss.

"We're often sat there and asked questions we've answered multiple times before," she wrote, "or asked questions that bring doubts into our minds and I'm not going to subject myself to people that doubt me. ... I believe that the whole situation is kicking a person while they're down and I don't understand the reasoning behind it."

Then, she was fined $15,000 after she skipped the news conference following her first-round win. In addition to that fine, the French Open -- as well as the other three Grand Slam tournaments, in a rare display of unanimity (or an unnecessary flex, depending on your perspective) -- threatened Osaka with harsher penalties for subsequent occurrences, up to and including possible disqualifications or suspensions.

On Monday she withdrew from the tournament, citing her battle with bouts of depression and anxiety, her need to focus on self-care, and her hope that her absence would turn the attention back to the tournament and the other players.

So who is right? Oddly enough, both sides.

Osaka, a self-described introvert, says she gets "huge waves of anxiety" when she has to speak to the media. "I get really nervous and find it stressful to always try to engage and give you the best answers I can," she wrote. "So here in Paris I was already feeling vulnerable and anxious and so I thought it was better to exercise self-care and skip the press conferences."

Fair enough. I've attended press conferences in a variety of sports. Most of them kinda suck. Some people do repeat the same old questions. Others do get confrontational. Others do intentionally ask cringe-y questions in hopes of a provoking click bait-worthy responses.

And some do ask condescending, insulting, and just plain stupid questions like, "How does it feel to be the only woman driver in such a male dominated sport?" No one ever asks men how it feels to be a male driver.

So I get Osaka not wanting to answer endless questions about why she has performed relatively poorly on clay. Or whether the upcoming Tokyo Olympics should be postponed. Or about social justice, especially since her feelings are already on full display. (If you're willing to take the public step and accept the personal sacrifice of withdrawing from a tournament to protest the shooting of Jacob Blake, do you really need to answer questions about where you stand?)

On the flip side, the organizers have a sport to promote -- and media coverage plays a key role.

And since access to most professional athletes is limited -- for example, I can reach out to a few Nascar drivers personally, but not to most of them. A press conference is often the only setting where journalists can glean a little insight.

The fact that most questions asked are less than thoughtful, or thought-provoking, is unfortunately beside the point.

That's why press conference attendance is mandatory at most tennis tournaments. Or at Super Bowl media day, since the NFL has long drawn a clear line between meeting with the media and promoting the sport.

From an organization's side, player press obligations are an important part of the deal.

Because -- except for the players, coaches, administrators, and owners -- sports are entertainment. Spectator sports are television shows. (By "television" I mean broadcast TV, streaming, etc.) While 256 players entered the French Open, the global audience numbers in the millions.

Except for the tiny fraction of people actually playing, the French Open is entertainment. It's a television show.

Or as Don Ohlmeyer, the one-time executive producer of NBC Sports used to say, "The answer to all of your questions is 'money.'" That's why tournaments, leagues, organizations, teams, etc., ensure that promoting the sport is part of a player's contract. That's why the top-ranked player in the world, Ashleigh Barty, says, "We know what we sign up for as professional tennis players."

Add it all up, and Osaka is right for wanting to take care of herself.

And the French Open, like professional sports in general, is right for wanting to take care of itself.

Which is the same situation sometimes faced by small business owners. Employees are people: People with different personalities, different behaviors, different strengths and weaknesses, and different needs. One size never fits all.

Should they have? Painful as it to say, probably not.

Excusing one means eventually excusing many. Excusing one creates a different competitive landscape; most players would prefer going straight to recovery (or just relaxing) to sitting in a crowded room fielding questions from, in large part, strangers. Plus, entering the tournament means entering into a contract that includes press obligations. Osaka knew what she was getting into -- and since the "what" didn't work for her, she chose, in a graceful and thoughtful way, to get back out.

But that's just my opinion; I could easily be persuaded otherwise.

Which brings us to why this really matters. Unless you're Naomi Osaka or a French Open official, you and I aren't directly involved. (We may care, even deeply, but we aren't actually involved.)

But the issue does bear considering, because at some point every leader will have to decide whether a rule must be rigid or can be flexible. Whether making a decision that is right for one may be, in the long run, detrimental to many.

Whether one size does need, at least in a particular circumstance, to fit all.

Because the more you've considered potential scenarios ahead of time, the more prepared you will be to make a thoughtful decision.

And, hopefully, the right decision.