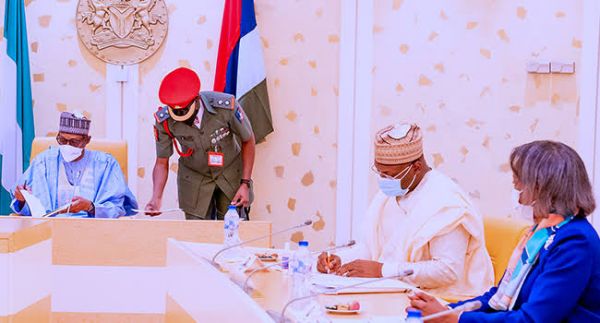 President Muhammadu Buhari had a meeting with Chairman of the Independent National Electoral Commission, Mahmood Yakubu and five commissioners on Tuesday.

A tweet from the presidency indicated that the meeting held at the First Lady’s conference room at the State House, Abuja.

The meeting came amid attacks on INEC facilities and offices in some states.

On Sunday, a newly completed office of INEC was set ablaze at Okwudor community in Njaba Local Government Area of Imo State.

It was learnt that the burnt office was commissioned shortly before the 2019 General Elections.

Meanwhile, a senior Advocate of Nigeria, Ebun Adegboruwa, has warned against using the attack on INEC offices as an excuse to extend the tenure of the president.

He said, “We are a nation governed by law and the most important one is the constitution. The tenure of the current President cannot be extended by one second; whether Nigeria burns or rain or brimstones fall from heaven. As long as we are still operating this constitution, the tenure of this president is predictable, it’s determined, it’s statutory; nobody has any power to extend it. Even if the election does not hold, that will not lead to the extension of the tenure of the current President. The constitution is clear about what happens if election does not hold.

“Having said that, there is no reason why election should not hold in Nigeria. The situation we have in the Southeast now is not as bad as what we had in the Northeast in 2015 and elections held successfully then. So, it is possible to isolate particular zones and areas where there may be violence for election to hold in other areas where there is peace and when there is a return of peace, we can always go back to conduct elections in those places.

“The time lag for transition is so elongated in the constitution that nobody can use that (Southeast situation) to birth a third-term agenda for the current President. It will not work. Let INEC not sell that dummy to anybody. Whether there are fifth columnists within this regime that are being paid to go and orchestrate violence in the Southeast by burning INEC offices and whether even INEC headquarters in Abuja is burnt down, this current regime will expire in 2023! No Jupiter can extend that tenure! So, if anybody is doing that for the purpose of getting any illegal extension, they should better have a rethink because Nigerians will not accept it.

“There is no provision for being sworn in for the third term, either by extension or failure to conduct an election. So, for me, Nigerians are ready; we are not blind people and we are not daft. Whatever is going on in the Southeast, in terms of INEC offices, all these press conferences that the INEC Chairman is holding and sending warnings, he is only warning himself; it doesn’t concern us as Nigerians.

“Whatever happens, this particular Muhammadu Buhari regime will come to an end in 2023. That idea (tenure extension) cannot hold water, nobody should sell it, nobody should dream about it, we will not accept it as a nation.”