All of Southeast complied with IPOB’s stay-at-home order. This is how it went in each of the 5 states 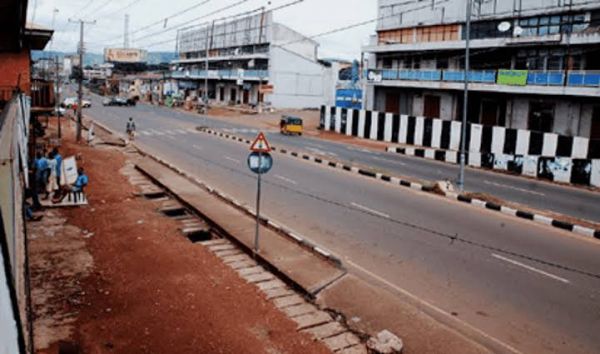 Human and commercial activities were grounded in the South East as well as in Asaba, Delta State, yesterday, as residents obeyed the sit-at-home order by Indigenous People of Biafra (IPOB) and Movement for the Actualisation of the Sovereign State of Biafra (MASSOB).

But a cross section of residents expressed mixed feelings over the total compliance. While some said it was necessary to honour millions of lives lost during the Nigerian civil war, others said they complied to avoid being attacked by hoodlums or IPOB members monitoring compliance.

Pro-Biafra group led by Nnamdi Kanu had in a statement, ordered people from the South East to sit-at-home between May 30 and May 31 for its annual Biafra Remembrance Day.  He said the order was in remembrance of  over five million Biafrans  who died during the three-year civil war between 1967 to 1970.

From Aba to Onitsha, Abakaliki to Owerri, Umuahia to Nsukka and Enugu to Awka and Nnewi, commercial activities were crippled while security personnel patrolled major roads to ensure safety of citizens.

In Imo State, socio-economic activities were brought to a standstill amid heavy security presence in major cities and towns, including Owerri, the state capital. It was the first time residents of Owerri observed the  sit-at-home order by IPOB. Markets, roadside shops, malls and filling stations were all shut down, while suburbs near Owerri blocked all entrances to ward off invasion by strange elements.

Similarly, the Eke-Onuwa, Relief, Alaba and Timber markets were shutdown. Even artisans at the popular mechanic villages both at Orji and Irete did not show up. Military helicopters were, however, seen hovering around Sam Mbakwe Cargo Airport as part of security surveillance.

Some residents said they obeyed the order to be on the safe side.

The situation was not different in Orlu and Okigwe zones, as streets were deserted and markets closed. Newspapers were not sold as distributors said vehicles conveying them from their various points from Onitsha, Aba and Port Harcourt were diverted back to their bases.

However, some residents said most of the people decided to stay at home as a result of incessant harassment by security agents.

Chijioke Maduako, a resident of World Bank area, said the way and manner military and police have been harassing innocent people made some people to remain at home.

In Abia, there was total compliance in Umuahia, Aba, Ohafia and Arochukwu.

In Umuahia, the state capital, and adjoining villages, residents stayed at home, leaving the streets, especially the ever-busy city centre, known as Isigate, deserted. Heavily armed policemen and soldiers were seen keeping surveillance in Umuahia metropolis and its environs, without molesting residents. The central town district of Main Park, Industry Road, St Michael’s Road, the ever busy Osisioma junction which leads into the city of Aba were all deserted.

Also, the main markets in Aba which include Cemetery Road, Ahia Ohuru, Ekeoha also known as Shopping Centre, Ariaria International and Asa Nnentu spare parts markets were all under lock and key.

Reacting to the sit-at-home order on a live television programme, Abia Governor, Okezie Ikpeazu said people of the state were not under obligation to obey or not obey the order.

In Awka, Anambra capital, residents also complied with the directive as schools, government offices, banks, hotels, restaurants and markets remained closed in spite of the deployment of heavy security in the area.

The bustling commercial activities and vehicular traffic often witnessed in Onitsha and environs were absent as major roads and markets were shut.

A drive by the reporter across different parts of Onitsha City, including satellite towns like Nkpor, Ogidi, Nkwele Ezunaka and Oba showed all bustling activities stopped.

Onitsha Main Market, Nkpor New Tyre and New Parts markets, including the larger International Building Materials Market in Ogidi all looked like ghost towns as the entrance gates were locked while no single person was sighted. Even heavy duty vehicles and containers that normally offload goods in such markets were missing. The situation was the same both at Old Motor Spare Parts Market (Mgbuke) Obosi and Nkpor.

The major roads in Onitsha were devoid of any vehicular movement as youths converted the roads into football pitches.

The luxurious bus parks at Upper Iweka and other loading bays and bus terminal for major transport companies were deserted.

At the Bridge Head, no vehicle was seen entering Onitsha, while some stranded travellers were seen with their luggage trekking across the bridge.

In Nnewi, the sit-at-home had total compliance as markets, offices, and even churches were shut down with residents saying they avoided coming out from their homes for fear of being attacked. From the ever busy Bank Road, down to Igwe Orizu Road, Ozubulu Road, Nnobi Road, Nnewi-Oba Old Road, etc, there was no vehicular movement, and no business activities.

President General,  Bridgehead Market, Sunday Obinze said markets in the area were shut because security of traders could not be guaranteed based on  insecurity situation in the South East.

The compliance was such that even shops in the streets did not open and people remained indoors until about 3pm in some areas. For instance, there was total compliance in the ever busy Abakpa Nike.

There was no vehicular movement as major roads were cordoned off with used tyres, tables and chairs while some youths made bonfire along some roads. Children were also seen playing football on major roads.

This, however, did not come without human casualties as about four policemen were feared dead following attacks by gunmen at three different locations in the state.

It was learnt that some gunmen and security operatives who were moving along deserted roads clashed and in the process some policemen were killed.

Eyewitnesses said the first incident happened somewhere along Chinatown bus stop, Ogui, when they  heard gunshots that lasted some minutes, which claimed the lives of two policemen.

The gunmen were said to have also struck along Okpara Avenue close to Central Bank office which left one policeman dead, just as they allegedly attacked another patrol team at Mgbemene, killing another policeman.

Efforts to get the police to confirm the casualty figure was not successful as the state Police Public Relations Officer, Daniel Ndukwe, did not pick his calls.

In Nsukka, the university town, there was full compliance from morning till about 4pm. Markets, motor parks, commercial and micro finance banks, fuel stations, shops, public, private and missionary schools were under lock and key.

Busy roads in the town like Enugu Road, Ogurugu Road, Aku Road,  University Road, Orba road, among others were deserted, with roadside shops all closed.

Hassan Yahaya, the Police Area Commander, said the area had been calm and peaceful as there was no report of violence.

In Ebonyi, all roads leading into the state, including those in Abakaliki, were deserted, except for few security agents seen moving around to ensure hoodlums did not hijack the exercise.

Some persons who defied the order and came out early in the morning were, however, attacked while their belongings, including vehicles and motorcycles were destroyed by IPOB compliance team around the Nnodo/Ogbaga road axis of Abakaliki.

It was gathered that the compliance team had divided themselves into groups and laid ambush in a forest along Ogbaga road where they attacked anyone moving on the road. Sources in the area said about five persons, including one security agent were killed when police arrived the area and engaged the IPOB team.

A staff of the Alex Ekwueme Federal University Teaching Hospital, Abakaliki said about four bodies were brought into the morgue by the police.

Efforts to get the spokesperson of the Ebonyi Police Command, Loveth Odah, to react to the development was not successful as at the time of filling the report.

Though a South South state,  schools, markets, banks, shops, filling stations and other businesses in Asaba, Delta State capital were shut for the better part of yesterday, in obedience to the sit-at-home order.

As early of 7.15 am, pupils and students of private and public schools were turned back from their school gates by teachers who explained that schools would not open for the day as there was no guarantee for the safety of students.

“We didn’t get any counter directive from government, so management felt it would not be safe to keep the children at home because nobody knows what might happen, today if they are allowed to remain in school,” a  teacher in one of the schools said.

“The action of school managements and business owners is a cautious approach and a demonstration of personal responsibility for the protection of lives and proper,” a government official who didn’t want to be named said.

Apart from the schools, the popular Ogbogonogo Market, and banks along the Nnebisi Road were closed to normal businesses. Shops and other business outfits were also shut down.