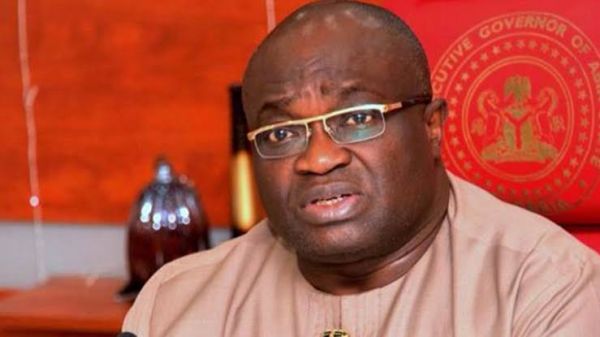 Governor of Abia State, Okezie Ikpeazu, has urged federal government to urgently open talks with IPOB, a pro-Biafra group, and similar groups around the country, as a means of tackling the rising insecurity in Nigeria.

There have been deadly attacks against security agencies in the five states – Enugu, Ebonyi, Anambra, Imo, Abia – that make up the Southeast region.

Courts, as well as facilities belonging to Independent National Electoral Commission, have also been attacked and set ablaze in the region.

Ikpeazu said the attacks were not far from terrorism and that there are meant to “frighten the police, make people to be afraid and withdraw their civic responsibility”.

The governor said this on Sunday during an interview with Channels Television’s programme, Politics Today.

Ikpeazu, who said he was not unsettled by IPOB’s activities in his state, said the proscribed group was trying to “fill a gap” wrongly and that the group was being energised by the activities of “criminal herders” who invade farmlands in the Southeast.

“In the first place what is the genesis of the agitation in the Southeast? Some people in the Southeast feel unprotected the way things are going and they also feel that some criminal herders that have found their way into our forests were not adequately sanctioned according to the rule book of Nigeria, and that created a gap.

“It is this gap that non-state actors are trying to fill, wrongly though,” the governor said when asked by the interviewer, Seun Okinbaloye, what he was doing about the IPOB’s sit-at-home order.

“But you also notice that there is a perception problem here, a lot of people feel that something needs to happen about protecting farmlands, protecting the people in the forests, and if the security architecture, as presently constituted, has failed to do that, people will begin to seek help from all kinds of things.”

Continuing, Ikpeazu said, “The good place to start is to listen to the crux of their agitation, because some of the things they have mentioned is what is agitating the mind of the ordinary people in the Southeast. So, what is wrong in listening? What is wrong in discussing the issues?

“If they say they want somebody in the Security Council, why can’t that happen?”

The federal government, he said, should begin a “conversation” immediately.

The Channels’ reporter asked Ikpeazu how the federal government could possibly hold talks with a group it had proscribed.

On the IPOB’s sit-at-home order, the governor said it was left for the residents to decide to obey it or not.

“If people decide not to go to market, that’s their business, government cannot say you must go to market,” he said.

Ikpeazu said the governors in the region were doing their best to protect residents. He said Abia has a vigilante service, which has been deployed to fight insecurity in the state.

“It is unfortunate that we have come to this point,” he said.