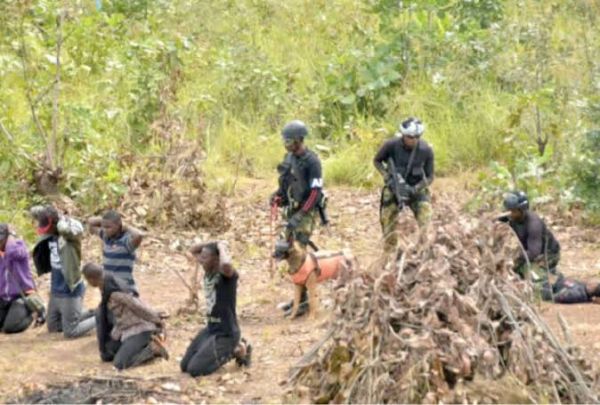 Determined to stop bandits from infiltrating Abuja, security forces have commenced massive deployment of personnel and equipment to all entry and exit points of the Federal Capital Territory (FCT).

This is coming barely 24 hours after Daily Sun exclusively reported that the military high command had approved a massive deployment of special forces to fringe towns and villages where bandits are believed to be taking refuge.

Sunday Sun investigation revealed that security operatives have also commenced raid on major spots in Kogi, Niger and Nasarawa states just as they have commenced demolition and raids on all known criminal hideouts within and around the FCT.

The security agencies made up of a joint task force are also said to be raiding major motor parks,  uncompleted buildings, markets, mechanic workshops and villages, where criminals and bandits are believed to be hiding.

It was gathered that following the alarm raised by residents of Bwari, a satellite town in the FCT, the military in conjunction with security agencies swung into action.

The military, it was gathered, is on red alert to counter any terrorists invasion. The Forward Operation Bases (FOB) is also combing the forests within Keffi, Niger and Kogi states, where some of the terrorists were said to have set up their camps. The camps have been demolished.

A security source who does not want to be mentioned said the security agencies are also clamping down on illegal drug sellers, especially the hawkers, as it has been discovered that they have direct contacts with the criminals.

The Guards Brigade, which is saddled with the primary assignment of providing security for the president, his immediate family, VIPs, the FCT and the surrounding states, has deployed enough manpower and equipment to give any criminal group that may want to cause trouble heat, it was gathered.

The Army Headquarters Garrison is also said to have deployed its men, especially in plain clothes, to some of these places to checkmate activities of criminals.

The source revealed that the military cannot afford to allow criminals, especially  bandits and terrorists, into the FCT.

The source said: “I can tell you that we are on red alert. We know there is tension over terrorists’ invasion of the FCT after the Niger State governor raised the alarm that the terrorists would soon come here. We know they would come and we are ready for them. Already, our men are all over the place to battle these men. Abuja is the last place we will allow them to come and carry out their atrocities.”

It was gathered that prior to the alarm raised by the Niger State governor, over possible invasion of the FCT, bandits had taken over some FCT villages, kidnapping innocent villagers, including traditional rulers, security operatives on a regular basis and collecting ransom from their relatives.

Recently, bandits invaded an orphanage home and abducted over eight orphans. The police said they were carrying out a covert operation to rescue the victims.

Meanwhile, following social media reports that kidnappers had infiltrated the nation’s capital, FCT Police Commissioner, Bala Ciroma, in a statement assured that the FCT was not under attack by terrorists, urging residents not to panic, as the police have put all security measures in place to protect lives and property.

But despite the assurances, activities of criminals have continued to thrive in the FCT.

Ciroma in a statement signed by the Command’s Public Relations Officer, Yusuf Mariam, said: “The attention of the FCT Joint Security Team has been drawn to a viral publication in the social media purporting that the ‘Federal Capital Territory is under the attack of Boko Haram terrorists’.

“The Joint Security Team of the FCT wishes to refute the mischievous publication targeted at creating palpable tension amongst the well-spirited residents of the FCT. Contrary to the speculation, the Heads of Security Agencies (HOSA) in the Federal Capital Territory in the bid to address security concerns within the FCT, held a strategic meeting on Thursday 29th April, 2021, where the team resolved to deploy alternative proactive crime-fighting measures within the FCT particularly in areas with challenging terrain including aggressive motorized/foot patrols.”

In the meantime, more schools have shutdown in Abuja, following threats by bandits to attack and abduct students. The mass closure of schools kicked off on Wednesday. On Thursday and Friday, more schools sent their students home.

Government schools are not left out, despite repeated assurances by the FCT administration that the schools were safe. The worst hit areas are Bwari, Kuje, Kwali and Abaji.