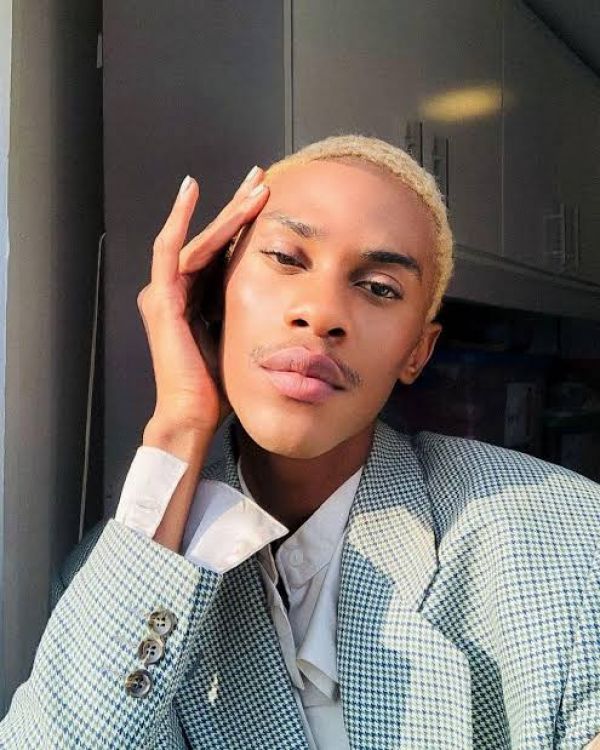 "I'm very experimental with my style," says Nigerian model and artist Uche Uba. "Makeup for me is, to an extent, an act of defiance. You cannot tell me what I can or cannot do to my face."

In Nigeria, significant parts of queer existence — including sex between people of the same gender, advocating for queer rights, and even associating with queer people — can be criminalized. If prosecuted and found guilty, people can be sentenced up to 14 years in prison and, under Sharia law in northern Nigeria, it can result in death by stoning. In response, some members of the Nigerian queer community have taken to using experimental beauty looks as a way to show resistance.

"Wearing makeup for me is largely showing and expressing who I am as a person," says Michael Kohh, a makeup artist and social media content creator who regularly posts videos of himself switching wigs and makeup looks, with funny voiceovers in Yoruba. "It has helped promote my work as a makeup artist, but I've [also] been able to show that, irrespective of who you are, you can wear makeup. It's helped me connect with the queer community."

Globally, men in makeup face bullying and homophobic trolling, even in progressive countries. In Nigeria, where homophobia is encouraged and still heavily enshrined in law, this often leads to queer-presenting people being victims of police brutality and physical attacks by fellow citizens. During the #EndSARS protests in October 2020, when Nigerians gathered in the streets to demand an end to excessive violence by the notorious Special Anti-Robbery Squad, many young Nigerian men who experiment with makeup by painting their nails or putting on lipstick recounted their experiences of being stopped, extorted, and bullied by the Nigerian police. I myself was taken into custody for over two hours in Lagos because my nails were painted.

"I get criticism from people who have been conditioned to think [makeup] is something for only women," Uba says. "When I first started experimenting with makeup, I had some people walk up to me and ask why, or try to touch my face to confirm if I have makeup on."

Queer women in Nigeria are similarly vulnerable. Ashley Okoli, a queer stylist, is known for her envelope-pushing makeup looks and outfits and, in particular, for being one of the pillars of the Nigerian alté community, a group that uses clothing, sound, art, and makeup as mediums of self-expression. However, Okoli's free thinking has turned her into an object of regular bullying from people who feel she should have to conform to their idea of what a woman should look like. She regularly deals with people walking up to her and questioning how she is dressed, or giving her unsolicited advice, or being trolled by people who say offensive and homophobic things on social media. Okoli, however, is unbothered.

"Other people think I do a lot [with my style and makeup]. I think they do not do enough," she says. "I get good and bad criticism, and the bad ones come from people that want me to look like a 'traditional Nigerian woman.' I think they're just really scared of nonconformity, but they can't stop looking. And it's good because after I do it, other people get more comfortable [being] different."

Okoli's makeup is loud, bold, unapologetic, and makes it clear she intends to occupy space. That fact triggers many who feel she shouldn't be that confident. "I have created this world in my head that helps me navigate living in Nigeria without going insane. I stay in my utopia and I can feel safe in my free spirit and loud queerness," Okoli says. "But the reality is still fucking scary."

If there's one thing that all these people agree on, it is that being queer in Nigeria is dangerous. Homophobic violence is a celebrated norm, so much so that it is treated casually. "Being queer in Nigeria is worse than living in hell," makeup artist Ayopo Abiri states succinctly. And like hell, Lagos is always hot. And the heat, not the homophobia, is why she isn't always in drag, as she would prefer.

"I can't lie. If Lagos wasn't so hot, I'd be in drag every day, makeup-wise. I just love constructing new features on my face. And seeing that it's a practice mainly used as escapism for gays, it became my only route to build that fantasy," Abiri says. "I mostly use a lot of colors [in my makeup] because if I can't be gay in public then my makeup might as well be." This is the reality for many queer people living in Nigeria: Abiri can't walk into public spaces holding the hand of her partner because existing laws criminalize two people of the same gender showing affection in public. However, there are no laws that stop her makeup being as "gay" or as expressive as she wants it to be.

Ayo Lawson, a freelance creative producer and director, is known for boxy shirts and dyed hair and brows. She is subject to daily questioning and criticism from people who demand she justify her looks. "I get criticism even from my parents," Lawson says. "My mum thinks I dress too masculine and that my bleached eyebrows are weird. Everywhere I go I get stared at. People ask if I'm a guy or a girl. But for me, I don't see things as masculine or feminine. I just dress for my comfort." Lawson doesn't see herself as a queer rights activist. She is just someone who wants to have fun with her looks, like many other young, queer Nigerians. "I don't see what I wear as groundbreaking. I just want to dress up like me."