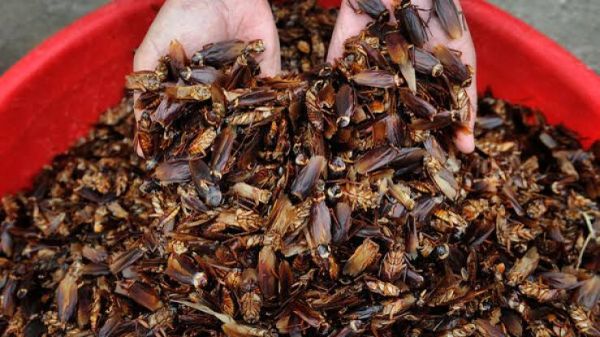 Patrons at a restaurant in Taipei, were recently shocked to see cockroaches crawling all over the place after thousands of them were released on the premises by two masked men.

On May 4th, two masked men entered the G House Taipei restaurant holding large bags filled with over 1,000 cockroaches, which they simply released at the reception desk on the second floor of the establishment, before fleeing the scene. Roaches started crawling on the floor, walls and furniture, and it wasn’t long before patrons enjoying their meals there started noticing them as well. Among the diners were policemen Taipei Police Department who were attending a banquet there, and they immediately created a task force to catch the perpetrators.

Taipei Police Department Commissioner Chen Jia-chang and New Taipei Police Department Commissioner Huang Tsung-jen were also in attendance at the G House banquet, so it was originally assumed that the cockroach attack was targeted at law-enforcement. However, the police investigation found no evidence of this. Instead, it is now believed that this was just a bizarre consequence of a debt dispute between the restaurant owner and local criminals.

The five suspects identified in this case – the two masked men who released the cockroaches, two lookouts outside and a getaway driver – are members of Bamboo Union, an organized crime ring which the restaurant owner allegedly owed money to. After their threats went unanswered, the criminals apparently decided to simply ruin the man’s business.

Commissioner Chen, who stayed at Zhongshan Precinct throughout the night and oversaw the investigation personally, told reporters that the bugs appeared to be Turkestan cockroaches bought from a Taipei store selling aquarium supplies. The insects are commonly used to feed aquarium fish and can be bought in fish stores or online.

Police vowed to track down the person who ordered the attack and others involved in the case, adding that they considered it an act of violence, similar to attacking people with paint.