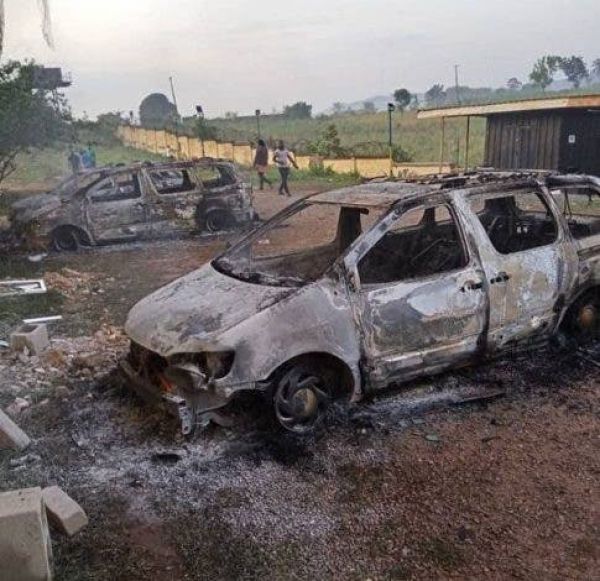 The attack was launched around 11.30 pm, barely 24 hours after the newly appointed Commissioner of Police for the state, Christopher Owolabi, assumed duty.

Credible sources said the two police inspectors were killed during a gun battle, while some AK47 rifles and a large quantity of ammunition were carted away.

Police officials called the masterminds of the latest attack in Anambra as “armed men”, but security experts closely monitoring recent happenings in the South fingered the Eastern Security Network (ESN), the militant arm of the outlawed Indigenous People of Biafra (IPOB).

A source confided that the assailants had also freed all the suspected criminals locked in the cells at the police station before setting the facility on fire.

“There was a serious gunfight between the invaders and police operatives at the station that lasted for several minutes…The two inspectors that died during the gun duel were targeted inside a non-functional filling station close to the police station.

“They were firing shots in a move to repel the gunmen from entering the police station but were overpowered,” he said.

It was learnt that the attackers, armed with sophisticated weapons besieged the station in a convoy of about ten vehicles.

A security source who does not want to be named said: “They opened fire while approaching the station and sustained the onslaught to the extent that they subdued the officers on ground, set the place ablaze and also burnt one patrol vehicle.

“This is not the first time they are doing this and it appears the South East is now the new battleground and a killing field that is seamlessly degenerating into a no-man’s land.

“Miscreants are having a field day committing criminality and sadly, the governors and other prominent people are finding it difficult to call them out.

“The locals are also complicit in the terrible things happening in the South East…They don’t want to expose the criminals. Government must act fast because, by the time they finish with police stations, they would start attacking other security operatives,” he said.

Our correspondent reports that police in Anambra have confirmed the killing of two of their personnel.

Spokesman for the command, Tochukwu Ikenga, said the new police commissioner had dispatched a tactical team for an on the spot assessment of the incident.

“The tactical team led by an assistant commissioner of police was equally told to identify and apprehend the hoodlums that perpetrated the attack,” he said.

Ikenga, who said that the bodies of the deceased policemen have been deposited at a nearby morgue, said investigations into the matter had begun.

Another policeman was killed when gunmen in the early hours of Thursday invaded Obiozara Police Station in Ohaozara Local Government Area of Ebonyi State.

The gunmen, who drove in a similar manner as those in Anambra invaded the station around 3 am and set the office of the Divisional Police Officer (DPO) and the admin building on fire.

A source within the area said that the main police station at the LGA was burnt down during the #EndSARS protest, forcing the officers and men of the division to be using a temporary shelter which was also burnt yesterday.