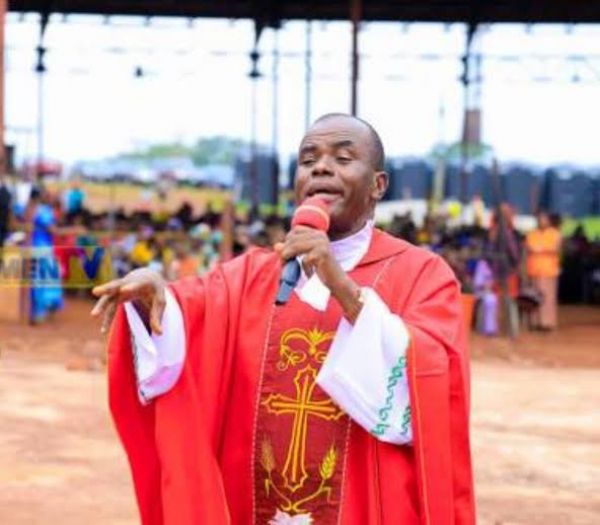 Fiery Catholic Priest and Spiritual Director of Adoration Ministry, Enugu (AMEN), Ejike Mbaka, has accused the Bishop of Enugu Diocese of the Church, Callistus Onaga of being behind his two-day ordeal.

The priest, who addressed his parishioners last night at the adoration ground in Umuchigbo Nike, Enugu, said the Catholic Bishop had planned to keep him for 30 days before finally sending him to the Vatican.

He also disclosed that his major offence was the blessing he pronounced on the leader of the proscribed Indigenous People of Biafra (IPOB), Nnamdi Kanu as well as his recent verbal exchange with President Muhammadu Buhari’s administration.

He said a lot of issues were presented against him after which the Church leadership, led by Onaga told him that he would remain indoors for one month, a period that would allow him pray and meditate over his activities.

The priest said he requested to be allowed the opportunity to come and address his parishioners after which he would shut down, “but they said ‘No’. ‘Allow me to go and celebrate Mass for my people just for today; I won’t even tell them that I am being punished. They said, no. I will just tell my members that I’m going for 30 days prayer, that after 30 days, we will come back and everybody will obey, they said, no’.

“I also begged them to appoint another priest to come and celebrate mass for you today; they also said no.

“They didn’t treat me in a pastoral way. I was asking ‘am I being punished for what’?

“They said it was a meeting, but even before I reached the Bishop’s house, conclusion had already been made. “What happened to me was like the day I was shot on the road.

“Unfortunately for them, even before the meeting, a woman was already going around bragging that the Bishop will call me for a meeting, and that I was going to leave my house here for 30 days, and that after the 30 days, I would be sent to Rome, and Adoration Ministry would be closed.

Mbaka cautioned that “in a time and cases like this, don’t give me a punishment that will cause troubles for us because I’m not alone.”

He said Onaga upon seeing the protest over his predicament, allowed him to go.

The cleric had been declared missing in the early hours of yesterday by the youth wing of the apex Igbo sociocultural organisation, Ohanaeze Ndigbo Youth Council Worldwide.

The council had given the federal government 48 hours to produce the fiery priest, accusing it of having a hand in his sudden disappearance following his declaration that President Muhammadu Buhari should resign if he could not deal with insecurity and provide employment for the teeming youths.

In a swift response, Department of State Services (DSS) denied arresting the cleric.

Spokesman of DSS, Peter Afunanya said Mbaka was not with the agency.

“This is not true. Mbaka was not picked up by the DSS. Mbaka is not with the DSS. The DSS did not pick him up, please,” he said.

When the news of his sudden disappearance broke, hundreds of youths, including Catholic faithful and supporters of the cleric marched to the house of the Catholic Bishop of Enugu Diocese who was said to have invited the priest before he disappeared.

The protesters destroyed the windows to gain entry.

In their show of solidarity, the protesters also marched around the Enugu metropolis, blocking major roads and causing traffic gridlock.

Enugu State Police Command had deployed four police vans to protect the Bishop’s court and guard against any display of violence by the crowd of supporters.

After hours of suspense and protests by his followers, Mbaka yesterday re-appeared at the residence of the Catholic Bishop of Enugu Diocese, Callistus Onaga.

The priest however did not say a word as he merely waved to the jubilant crowd.