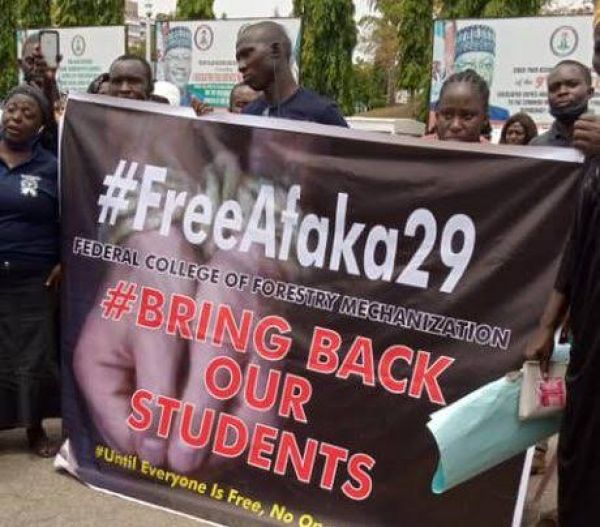 Some parents of abducted students of Federal College of Forestry Mechanization in Mando, Kaduna State, on Tuesday, staged a protest at the National Assembly.

The parents accompanied by activists Omoyele Sowore and Deji Adeyanju and some members of Student Union Government of the school blocked the entrance of the legislative complex demanding action by the federal government to secure the release of the students.

The protesters marched from the Unity Fountain to the National Assembly carrying placards with different inscriptions like “#FreeAfaka29”, “Bring back our students”, “Education is our right” and “Secure our institutions.”

They complained that the federal and state governments have neglected the abducted students who have been held captive for 55 days.

Kaduna State government, they said, has claimed that the school is a federal institution and it cannot do anything about it.

The protest comes over a month after gunmen raided the college and kidnapped 39 students – one of the latest mass abduction targeting a school.

The demonstration also comes barely 24 hours after bandits who kidnapped students of Greenfield University, Kaduna, threatened to kill the remaining 17 abducted students if a ransom of N100 million is not paid.

On his part, the state governor, Nasir El-Rufai, has vowed not to negotiate or pay money to bandits in the state.