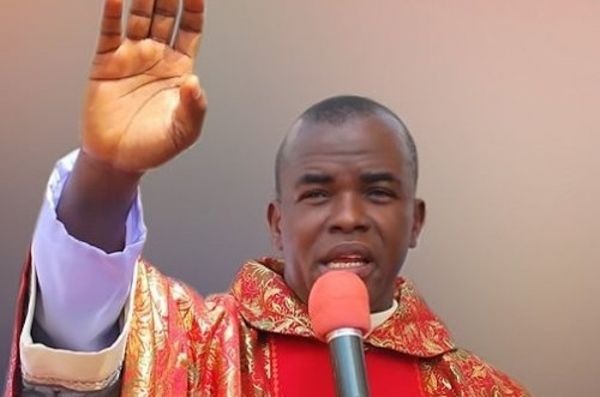 Spiritual Director, Adoration Ministry Enugu Nigeria (AMEN), Ejike Mbaka, yesterday dismissed the Federal Government’s accusation that he called for the impeachment of President Muhammadu Buhari because he was denied contracts.

Mbaka who insisted that no amount of government patronage was capable of influencing his utterances since he was speaking strictly under the leading of the Holy Spirit, said he was “happy that the truth was hitting them. We are not afraid of them. Buhari cannot do it again; health and age are not on his side. We need a stronger and an experienced goal keeper in a time like this. If they want to put it that it was because of contract, let them come and build the highest university here and begin to mess up, I will still speak.

“I don’t want to talk about that because it’s a laughable and childish accusation. Whoever is saying that, is a shame to himself and shame to the people he is representing. Mbaka’s voice came from the spiritual. So what I’m saying is unchallengeable.

“With enormous joy, I am happy that the truth is hitting them hard. No amount of money can merchandise the Holy Ghost anointing in me. Mbaka is unbribable. Even if they come and build the highest university here, that cannot bribe me.”

He, however, admitted that he led three men to meet with the president during his first tenure explaining that they were security experts who had offered to help in solving Nigeria’s security challenges.

“I don’t know them, but they came to Enugu and pleaded for me to link them to government. Because of the level of insecurity and how Nigeria has been moving oil outside the country. These are the three people they rejected their offer.”