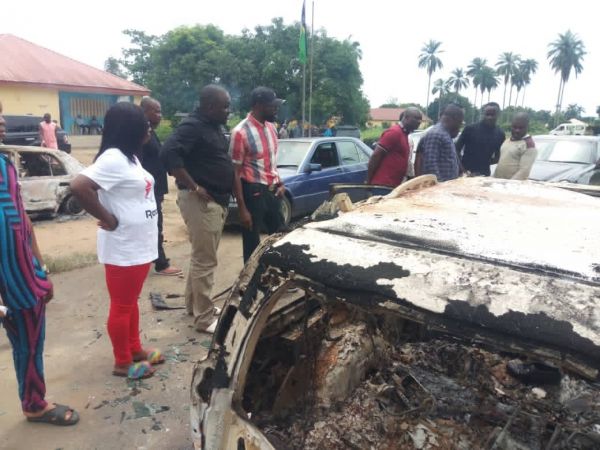 A female police officer was also injured in the attack, while five vehicles parked at the station’s premises were set ablaze, according to a statement from Chairman of Ikono council, Nyakno Okoibu.

The statement issued by the chairman’s media aide, Nsisong Ntuk, said the attack occurred at about 3 a.m.

The statement said members of IPOB’s security arm, Eastern Security Network (ESN), were suspected to be behind the attack.

“The chairman has been making overarching measures to ensure that normalcy is restored to the area of attack and other parts of the Local Government Area,” the statement said.

“The chairman wishes to reassure the people of Ikono that in liaison with the Chief Security Officer of the State, Governor Udom Emmanuel, all necessary apparatus will be activated to ensure that the perpetrators of this heinous crime are apprehended and brought to book.

“Akwa Ibom State has over the years been known as a peaceful state where lives and properties of those domiciled within it are safe and secured. The narrative will not change now,” the statement added.

The local administration has requested people to volunteer to the police useful information about the attack.

The spate of attacks on security officials in the South-east and South-south has compounded the security challenges in the two regions.

Police facilities have been previously attacked in Essien Udim and Ika local government areas of Akwa Ibom State, with scores of officers killed.

IPOB, a pro-Biafra group which has been proscribed by the Nigerian government, has denied involvement in the attacks in the two regions.