Southeast govs met in Enugu on Sunday over worsening insecurity in the zone. This is what they discussed 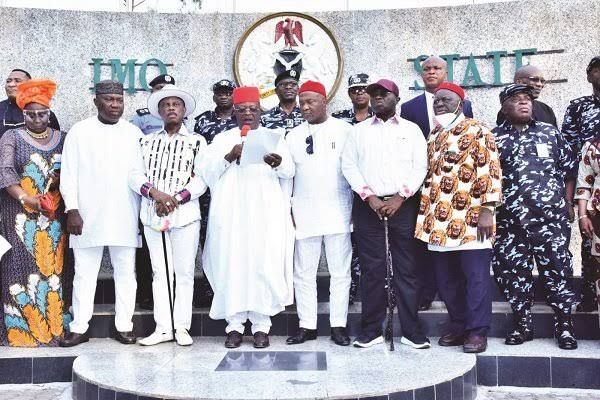 How to fast track the setting up of a joint regional security outfit to tackle the worsening insecurity in the region was top on the agenda of the Sunday’s security meeting by the South-east governors in Enugu state.

Beyond the general insecurity in the South-east, the meeting appeared to have been prompted by the daring attack on the country home of Imo state governor, Hope Uzodinma, and the bloody attacks on police facilities in Anambra and Enugu states recently.

The meeting, which was the second in about two weeks, was attended by the host, Governor Ifeanyi Ugwuanyi of Enugu State, Governor David Umahi of Ebonyi, Governor Okezie Ikpeazu of Abia, and the Deputy Governor of Imo, Placid Njoku.

Minister of State for Mines and Steel Development, Uchechukwu Ogah, President General of Ohanaeze Ndigbo, George Obiozor, Obi of Onitsha, Igwe Alfred Achebe, Chair of Christian Association of Nigeria (CAN), South-east, Goddy Okafor, and a renowned businessman, Emmanuel Iwuanyawu, were among dignitaries at the meeting.

From the communique read by Umahi, who is the chair of the South-east Governors’ Forum, the meeting agreed on the structure and operational modalities of the joint security outfit called Ebubeagu. To this end, the attorney generals in the five states of the region have been directed to tinker with the existing laws in their respective states to give legal backing to the outfit.

The meeting also agreed to set up an advisory board for the security outfit which they said would work with the police and other security agencies to maintain security and stability in the South-east states.

The South-east governors and other leaders from the region threw their weight behind the agitation for the restructuring of Nigeria and the establishment of state police.

“The meeting is in support of restructuring, the setting up of state police and other national issues as discussed in the last NEC meeting,” Governor Umahi said.

He added, “South-east governors agreed on the implementation of various #EndSARS youth empowerment programmes in the South-east states as soon as possible”.

The meeting also backed the banning of open grazing in the different states in the region, and urged security agencies and local vigilantes to enforce the ban.

The meeting directed the president of the Ohaneze Ndigbo to immediately form a peace and reconciliation committee to engage the people of the region “for the peace and security of our people and her visitors”, as well as a Strategy and Welfare Committee “to engage and protect our people, especially those who are being unfairly treated”.

The two committees, the meeting said, must become functional “within the next 10 days.”

The CAN chair in the region, Okafor, said the influential religious group was ready to partner Ohaneze Ndigbo for the peace and stability of the South-east.

“We believe in peace, we preach peace and reconciliation and we will do our best to reconcile our people who have been offended,” he said.

Apart from the South-east, the South-south region has also come under tremendous security challenges, especially with similar attacks on police facilities.