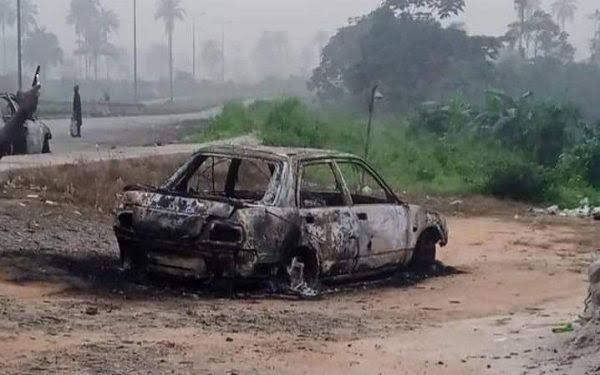 Eight security operatives were reportedly gunned down by unknown armed men, in Ikwerre Local Government Area of Rivers State on Saturday night, along the Omagwa/Isiokpo/Elele Owerri road, in the area.

Among the security personnel were three soldiers, three from Nigeria Customs Service (NCS) and two from the Nigeria Police Force.

According to the information gathered, the perpetrators, numbering over 50, carted away rifles belonging to the security personnel.

The yet-to-be-identified gunmen were said to have attacked the Customs in Elele and burnt their operational vehicles; while the soldiers were attacked in Omagwa.

The State Police Public Relations Officer (PPRO), Nnamdi Omoni, a Superintendent of Police (SP), confirmed the incident, but declined comment on the casualty.

Omoni, in a statement from the Police Command, said information at his disposal was sketchy, adding that normalcy had returned in the area.

He disclosed that Commissioner of Police, Friday Eborka, has ordered a thorough investigation into the attack, with a view to arresting those behind the operation.

The spokesman added that security agencies have increased a joint security patrol to arrest the fleeing gunmen.

Omoni stated: “I can confirm the attack on security personnel along the Omagwa/Isiokpo/Elele Owerri Road.

“The CP has launched a full scale investigation into the dastardly attack with a view to arresting the perpetrators and bringing them to justice. Meanwhile, the area is calm with reinforced and increased joint patrols of that stretch and other areas in the State by the security agencies. So far, the State is calm and secure, and no cause for alarm.”

Reacting to the incident, yesterday, Rivers State Governor, Nyesom Wike, condemned the barbaric and dastardly attack on security personnel and tasked security operatives to fish out the perpetrators.

Wike, in a statement by his Special Assistant on Media, Kelvin Ebiri, said: “The Government of Rivers State is saddened by the unwarranted callous attack on security personnel. We offer our sympathies to the relatives of those who lost their lives in the attack.

“We condemn this heinous act, share the grief of the security agencies and convey our sincere condolences.”

The governor, who charged the security agencies to be vigilant, affirmed that the government and people of Rivers State stand in solidarity with security agencies at this difficult times of this unwarranted and mindless violence.