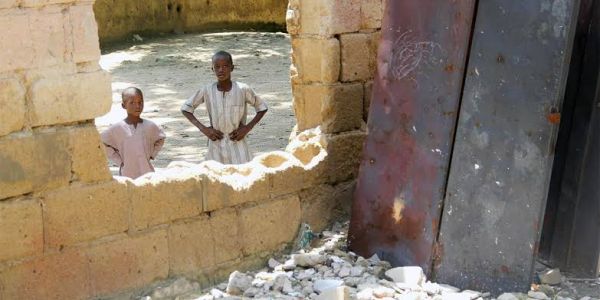 Atrocities committed by Boko Haram insurgents in Yobe town, Geidam, which they invaded at the weekend, were on Sunday lamented by chairman of Geidam Local Government, Ali Kolo.

Kolo, who spoke with our correspondent on telephone, could not say who was in control of Geidam as of last night. He was emphatic however, that insurgents were in firm control of the town between Saturday night and Sunday morning.

According to him, Boko Haram had their evening prayers in the town.

“I don’t know exactly who is in control of my town as we speak, but what I am sure is that some Boko Haram members are still inside Geidam. I am also sure that as of yesterday (Saturday), they had their evening prayers at the House of the District Head and even preached to the people to convert and follow them,” Kolo said.

He said he heard that some of the retreating insurgents were killed by the military stationed in Damasak in Borno State and some vehicles recovered from them.

Kolo said a teacher in Kawuri Primary School, who was his neighbour, was brutally murdered yesterday morning by the insurgents.

“As we speak, two of my people, including a teacher at Kawuri Primary school, Mallam Baba Tazira, a Babur/Bura man, have been beheaded.

“The teacher was beheaded in his official staff quarters behind the school, and this is in addition to dozens of my people who were killed, injured, displaced and missing since the three days invasion,” Kolo said.

“YOSEMA, as of yesterday, evacuated the injured victims of gunshots and they are receiving treatment at the government health facility. Also, our team has identified three neighbouring communities where displaced persons from Geidam are currently hosted.

The first batch of our team as directed by the governor has arrived in Yunusari to assess and are providing immediate emergency support to the displaced victims, especially during this holy month of Ramadan.

“While we continue to pray for our security agencies to succeed, we also want to reiterate the commitment of Yobe State Government and obligations of the agency towards all displaced persons and other victims of the attack, who need to be supported and attended to at this difficult moment,” the YOSEMA boss said.