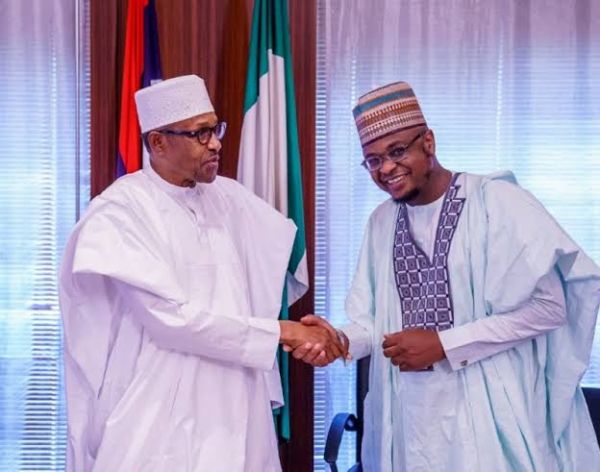 Nigerians on the social media have called on President Muhammadu Buhari to sack Minister of Communications and Digital Economy, Isa Pantami, over his alleged link with terrorist groups, Taliban and Al-Qaeda.

The Nigerian Twitter community also said the minister could not be trusted with the data of Nigerians, especially with the ongoing National Identification Number and Subscriber Identity Module integration exercise under his watch.

In a viral video recorded many years ago which was later confirmed by his lawyer, Michael Numa, the minister was seen engaging the late Boko Haram leader, Mohammed Yusuf, in a public debate.

Pantami, an Islamic scholar, according to Peoples Gazette, also once declared that he was always happy when infidels were massacred.

Peoples Gazette said Pantami’s comments were contained in three audio recordings of his teachings in the 2000s, when he took extreme positions in support of the brutal exploits of Al Qaeda and Taliban elements on a campaign to obliterate the West and conquer other parts of the world.

Peoples Gazette also said Pantami did not return a request seeking comments on whether or not he has eschewed his violent Salafist views.

The hashtag #PantamiResign has since been trending online having over 30,000 retweets as of the time of filing this report.

A tweep, @YemieFASH wrote, “A terrorist apologist is not worthy of being a government official. #PantamiResign”

“This Pantami issue is far more serious than we treat it to be. I had this nightmare last night where Boko Haram had the data and location details of every single Nigerian, including the president. Pantami has to resign and answer the law. We’re in danger!! #PantamiResign,”@MOMPERE55 stated.

@mrflairr also tweeted, “Whether Nigeria is a serious country or not, we are calling for the resignation of Pantami immediately. Please all of us need to make this trend and put pressure on the government to achieve this. #PantamiResign”

“Pantami having access to NIN of all Nigerian citizens is the same thing as Osama Bin Laden having access to our homes especially the kitchen…Pantami resignation is not an attack to the Arewa people it’s a preventive measure to kill Osama Bin Ladin again. #PantamiResign,” wrote @Ugonna37489321.

Another tweep, @DrOlufunmilayo, however, said President Muhammadu Buhari who returned to the country on Thursday from London, might not be aware of the calls for the resignation of the minister.

“The funny thing about this whole #PantamiResign situation is that Buhari may not even be aware at all,” the user tweeted.

Following the outrage that greeted Abdulaziz’s story, Adeosun resigned in September 2018 barely three years after her appointment by the President.

But the reporter took to Twitter on Thursday to defend Pantami over his alleged past relationship with terrorist groups.

Kemi Adeosun has since been trending online having 15,000 retweets as of the time of filing this report.

Abdulaziz, who tweeted via @Abdulfagge, urged Nigerians not to judge Pantami by his past, a comment that Nigerian Twitterati has since linked to ethnic bias.

Abdulaziz wrote, “On @DrIsaPantami: Yes, public officers deserve all the scrutiny. But while we’re at it we’ve to be thorough, fair and nuanced. Yes, we can dig the past but passing judgment would have to alongside context and current realities. A lot of people have had a severed past. We all have a past. Not everyone will escape if our past actions and speeches are used against our present positions.”

Reacting, a tweep, @Chylife6 wrote, “The forged NYSC certificate of Kemi Adeosun was it not her past but you made sure she was sacked and replaced by a Fulani? Now you just remembered that we all have a past? You are a hypocrite.”

@FS_Yusuf_ wrote, “They want us to forgive and forget something more deadly than what they slew Kemi Adeosun for. We ain’t blind neither are we stupid. We see the hypocrisy, we see the selective activism and we will start acting accordingly. No one has monopoly for sentimentality. Let’s go rough.”

@ronaldnzimora accused the journalist of being paid to support Pantami after he exposed Adeosun.

“If Isa Pantami does not resign, then the resignation of Kemi Adeosun was a huge joke. What is sauce for the goose is sauce for the gander, except she was slaughtered on the altar of bigotry and ‘cabalisation’ of Nigerian politics. #PantamiResign” @AyoBankole submitted.

“Was it not you that did the exposé on Kemi Adeosun’s forged NYSC certificate which (rightly) forced her out of office? Now your brother is implicated in something FAR worse but we should let bygones be bygones?” @DavidHundeyin asked.

A public commentator, @gimbakakanda, also weighed in on the matter.

“I just woke up to some blog reports castigating @Abdulfagge for tearing Kemi Adeosun apart and overlooking Pantami. Although he’s capable of speaking for himself, this is a ridiculous profiling of his career. The same Abdulaziz who exposed Maina, a fellow Muslim and Northerner?” he asked.

The group also asked the US to place the minister on its terror watch list if the allegations against him were found to be true.

The petition dated April 11, 2021 and titled, ‘Terrorist Watchlist – Isa Pantami’, was signed by the convener of the group, Deji Adeyanju.

It partly read, “It is also further alleged that he had in the past openly supported and endorsed global terrorist groups like Al-Qaeda and the Talibans.

“Pantami is said to have praised Osama Bin Laden describing him as a hero and a better Muslim than himself. He has not renounced these views in the face of new revelations by the media. His views are extremist views and a threat to a multi religious nation like Nigeria.

“He is a senior member of Buhari’s regime and we are of the view that a supporter of Mullah Omar and Osama Bin Laden should not hold a sensitive position and be in charge of the database of Nigerians. We are confident that Pantami will not resign or be sacked despite the public outcry because Buhari is drawn to men like him.

“We implore you to investigate these allegations and if true, place him on your terrorist watchlist permanently. Those who express extremist views remain a threat to world peace as they support mass murder of both Christians and Muslims globally. This remains unacceptable.

“Our reply to those who say these men may have had a change of heart is that terrorists don’t repent, they are only looking for an opportunity to get close to power so they can strike harder.”