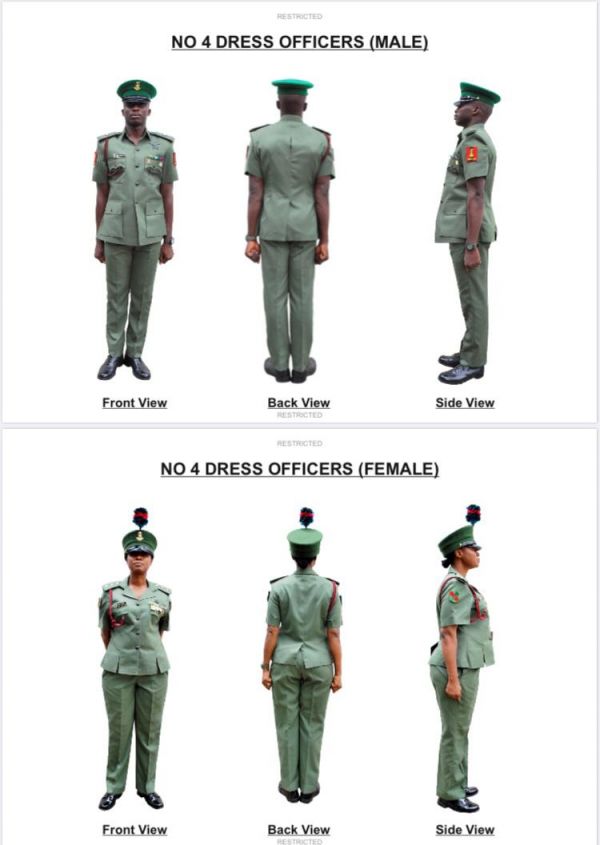 Chief of Army Staff, Ibrahim Attahiru, has prescribed a new dress code for officers and men of the Nigerian Army.

The directive, according to military sources, was contained in a signal to all Army units and formation across Nigeria.

The directive comes about three months after Attahiru, a lieutenant general, assumed office.

The new directive is part of the restructuring being undertaken by the new army leadership.

Shortly after assuming office, the army chief approved the redeployment of 204 of its officers to new formations across the country.

The redeployment came the same day Attahiru was confirmed and elevated from the rank of major general to lieutenant general.

Reforms in the army are usually expected especially when there is a change of leadership.

With effect from next week, all officers and soldiers are to dress in their plain green jacket on Mondays and Fridays. The dress is popularly known as “number four dress” in the army.

The number four dress is like a short-sleeved suit, popularly known as safari. It has four buttons and four pockets and is usually worn with a peak cap.

The new directive further stated that on Tuesdays, Wednesdays and Thursdays, all officers and soldiers are to dress in the plain green uniform which requires them to tuck in. It is known as “number five dress.”

The number five dress is a short-sleeved dress worn with a beret and can be worn with a combat boot or bate shoe.

The materials for number four and five dresses are all the same with their styles being the only difference.

The directive further stated that the dress for various operations still remain the woodland and desert camo depending on the region of Operation. It is known as the number six dress.

According to sources, the mode of dressing contained in Attahiru’s directive was what obtained before the coming of the immediate past Army Chief, Tukur Buratai.

“Butatai gave a new directive while he was in power that number four uniform be used only for seminars and number five for office,” the source said.

He added that the new directive is not new to the army.