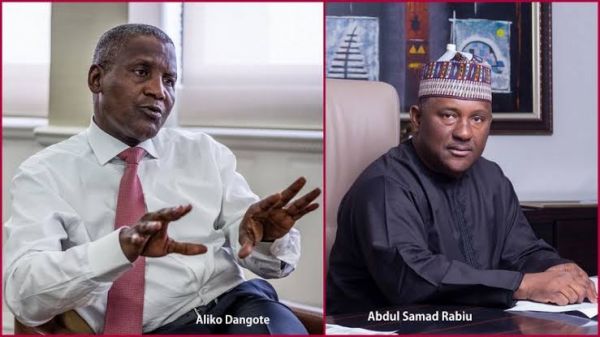 The latest clash between two of Nigeria’s richest men, Aliko Dangote and Abdul Samad Rabiu, is over sugar. It is a dispute over who controls the sugar market in Africa’s biggest economy.

But available documents shed light on the accusations and counter-accusations by the two sides, and the government’s role in the feud.

Backward integration is a business model in which a firm expands into its supply chain rather than buy raw materials elsewhere. As an example, instead of buying maize from external suppliers like farmers, a company producing infant food may choose to invest and own maize farms and supply itself. This often helps in reducing cost. There is also forward integration, in which a company buys its own products for other purposes.

In the sugar context, the Nigerian government through the regulator, NSDC, has mandated sugar companies to not just build refineries and process imported sugar extract, but invest in developing the supply side — namely, sugar cane plantations. This is expected to reduce Nigeria’s import-dependence, stimulate the economy, create jobs and support the Naira.

While that is being developed to meet the country’s demand volume, NSDC allocates quotas of sugar extract firms can bring into the country based on its backward integration investment size.

Dangote Sugar Plc, supported by Flour Mills of Nigeria Plc, two of Nigeria largest sugar makers, argues that BUA has not met the backward integration requirement of the government to set up a new refinery, which they believe would confer an advantage on the firm. The government had in 2019 assured that no new sugar refinery would be allowed for now, they said.

In a joint letter to Minister of Industry, Trade and Investment, Niyi Adebayo, Dangote and John Coumantaros, respectively chairs of Dangote Sugar and Flour Mills of Nigeria, argued that BUA’s new refinery in Port Harcourt could stand-in the way of “the attainment of the National Sugar Master Plan (NSMP) and the sustainability of Nigeria’s local sugar industry.”

“Under the revised guidelines released by NSDC, it makes it absolutely clear that the allocation of quotas henceforth, shall be based on quantitative and verifiable improvements in the Backward Integration Programmes of players in the Industry.

“The mid-term review conducted by NSDC was clear in its conclusions – BUA has failed to invest substantively in local production or complied with its undertakings under its BIP,” they wrote.

Dangote and Coumantaros alleged that BUA only had the intention of bringing raw sugar imports into the country despite its pledge to commit money to sugar cultivation, so as to obtain quota allocation to import raw sugar, refine and sell.

“The impunity with which BUA has contravened the provisions of the NSMP, has placed the other players, who are abiding by the regulations, not only at a significant disadvantage, but has discouraged them from undertaking the huge investments that would deliver the desired objective of 100% local production of sugar, unless of course, the ministry wades in and addresses the situation,” the document said.

Both men requested the minister to launch a probe into the volume of raw sugar imported by BUA’s Port Harcourt refinery “and the appropriate penalty in terms of duty (60%) and levy (10%) to be charged on the company.”

Minister of Industry, Trade and Investment in February requested BUA to respond to the allegations. He warned of action if a response was not promptly given.

BUA Sugar, in a response in February, took “serious exception to the ludicrous claims by its two major competitors that it aims to circumvent the BIP of the sugar industry” and said it has invested billions of Naira in the backward integration policy of the government.

“To thus claim that the BUA PH export focused refinery in an Export Zone will amount to an undermining of the NSMP is false,” the letter signed by Rabiu said.

BUA argued that its project in Port Harcourt was approved by President Muhammadu Buhari, but cited a different law – Nigeria’s free trade zone law, the NEPZA Act. It said the law allows it to operate the refinery to support its role as a counter-balance to the Dangote and Flour Mills duopoly and alleged price manipulation.

It said the Ministry of Trade and Investment that wrote to it was aware of the refinery as it was the one responsible for recommending and seeking the president’s approval.

“We are wont to believe that the ministry is aware of the entire process leading up to this approval. As you are aware, Honourable Minister, the approval went through a rigorous two-year process before it was finally assented to by Mr President.

“The attempt by Dangote and Coumantaros to call the presidential approval upon which that project is sited to question – is to call to question, the authority of the president’s powers and the diligence of your ministry,” Rabiu said.

Rabiu accused Dangote Sugar and Flour Mills of attempting to sabotage the country and its institutions and get rid of competition towards achieving a monopoly “that holds the country to ransom.”

“The NEPZA Act upon which this project is based, gives the permission to process, add value and export at the same time. Companies under this Act are allowed to process, and if they so wish, sell 100 percent of their production in Nigeria with payment of duties based on the current raw materials tariff.

“As a matter of fact, Aliko Dangote of Dangote Industries, who is one of the complainants alleging and attacking this approval has also applied and obtained the same approval for his Refinery Project in Lekki, Lagos State, where it is currently enjoying the same benefits of being in an EPZ,” it said.

Nonetheless, the company said its Port Harcourt sugar refinery is focused on exports, not the Nigerian market.

It, however, said in the event the two competitors (Dangote and Flour Mills) “try to increase prices with wanton abandon locally, we are permitted under the extant laws and regulations to intervene, act as a buffer and sell locally as per the NEPZA approval. This is what threatens them the most – an end to arbitrary collusion to create sugar scarcity and keep prices high.”

On backward integration, BUA claimed it was doing more than its competitors. It said it has a 20,000 hectares Lafiagi Sugar Project that has 10,000 tonnes per day sugar mill, 200,000 tonnes per annum sugar refinery, 20 million litres ethanol plant and a 35 mw power plant from Bagasse.

It said the firm is the only one amongst the three producers with a plantation, sugar mill for crushing sugar canes, a refinery to produce white sugar, and an ethanol plant. It accused Dangote Sugar and Flour Mills of not doing as much as it does, and being “hypocritical” on the issue of backward integration.

BUA, in addition, obtained a court injunction restraining the government from moving against the company’s sugar operations.

He also added that the Company is socially responsible and considers price-fixing to be unethical.

“Such allegation is highly mischievous and a calculated attempt to smear the reputation of DSR. DSR can only sadly conclude that the online publication is mischievous and geared at creating some form of undue advantage to some Industry players,” he said.

He said the company began its Backward Integration Programme (BIP) with a 10-year sugar development plan, to produce 1.5 million metric tonnes per annum of sugar from locally grown sugarcane. The project commenced with the acquisition of large expanse of land in strategic locations such as Taraba State, Adamawa State and Nasarawa State.

The company said it commenced rehabilitation and expansion of its Sugar Factory at Numan. Sugarcane planting has also commenced in the two other BIP locations.

Relations between Dangote and Rabiu became frosty in June 2020 when BUA Cement, majority-owned by Rabiu, got a restraining order against Dangote Cement, where the Africa’s wealthiest man wields the majority stake, after the police invaded its three sites in Obu Okpella, Edo State.

BUA entered a pact with France’s hydrocarbons group, Axens, in September 2020 for the development of a 200,000 barrels per day refinery and petrochemical plant in Akwa Ibom State, a little more than a year to the start of Dangote’s own 650,000 bpd refinery in Lagos.

The Nigerian government last year allowed only the cement arms of Dangote Group and BUA Group as well as one other unidentified firms from its freeze on cross border trade more than one year after it placed the bar.

Dangote’s fortune is $12.1 billion, while Rabiu, Nigeria’s third most affluent person, is worth $5.5 billion, according to Forbes.