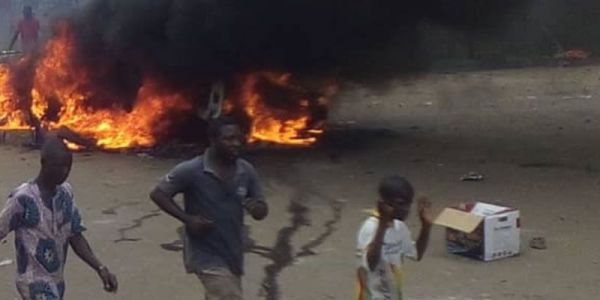 A police station in Imo state has been set ablaze by gunmen — for the second time in two days.

The police station, located in Ehime Mbano LGA, was burnt down on Tuesday afternoon.

Reports have it that police officers took to their heels when the station was invaded by gunmen.

The gunmen were also said to have freed the detained persons at the police station.

He, however, added that no death was recorded during the invasion.

“Yes, I can confirm to you that the police facility was attacked today by bandits. No casualty on the part of police, no loss of arms, but three vehicles were burnt in the process,” he said

The attack on the police station comes hours after Vice-President Yemi Osinbajo visited the state for an assessment of the damage done during a previous attack.

The police command headquarters and a correctional service centre in Owerri, Imo state capital, were attacked on Monday.

Some inmates were freed while buildings and vehicles were razed when the police headquarters was invaded.