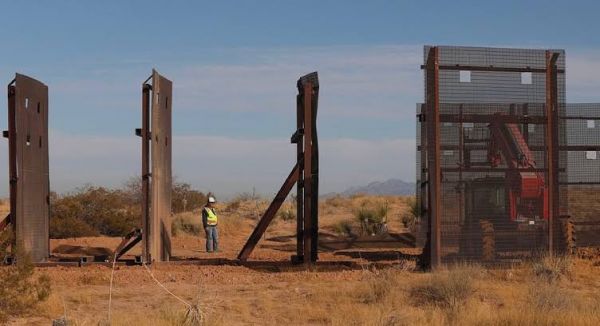 He later officially ended the national emergency order at the border

Joe Biden is considering restarting construction on Donald Trump's southern border wall as his administration continues to grapple with a growing immigration crisis including record numbers of illegal crossers.

Homeland Security Secretary Alejandro Mayorkas told employees, according to the Washington Times, that construction might resume to plug 'gaps' in the current barrier between the U.S. and Mexico.

The move comes as Biden made a big spectacle on Day One of his administration by issuing an executive order freezing Department of Defense funding for border wall construction. He later officially ended the emergency order at the border, but there were concerns about where the funds would go that were already appropriated for the border wall project.

Now Biden's administration is facing record numbers of migrants arriving at the southern border every day and federal government holding facilities are 'stretched beyond thin,' according to an independent report concluded after a visit to the sites.

Mayorkas told Immigration and Customs Enforcement (ICE) employees during a meeting last week that Biden canceling the construction left 'room to make decisions' on finishing 'gaps in the wall.'

'It's not a single answer to a single question. There are different projects that the chief of the Border Patrol has presented and the acting commissioner of CBP [Customs and Border Protection] presented to me,' Mayorkas said, according to notes of the ICE session reviewed by the Times.

'The president has communicated quite clearly his decision that the emergency that triggered the devotion of DOD funds to the construction of the border wall is ended,' he continued. 'But that leaves room to make decisions as the administration – as part of the administration – in particular areas of the wall that need renovation, particular projects that need to be finished.'

On February 11, Biden ended Trump's southern border emergency, which was issued through executive order in February 2019.

In the reversal, Biden slammed Trump by saying: 'Building a massive wall that spans the entire southern border is not a serious policy solution. It is a waste of money that diverts attention from genuine threats to our homeland security.'

There were immediate concerns with the legality of the reversal, with experts claiming it could be illegal for Biden to stop funding that was already appropriate in Congress-approved funding for the wall specifically.

The president campaigned on the promise of immediately ending the building work along the U.S.-Mexico border.

Charles Young, a public affairs officer for the GAO, confirmed they were investigating whether Biden was legally allowed to end the construction.

Congress approved nearly $1.4 billion in border wall funding in December 2020 for fiscal year 2021 as part of a $900 billion coronavirus stimulus package under Trump.

Chair of the Senate Republican Policy Committee Roy Blunt slammed Biden for the change, claiming as a 36-year veteran of the Senate, he should know procedure better.

'He was in the Congress a long time,' Blunt said. 'He knows it's the Congress' job to authorize how the money is spent and the president's job to spend it efficiently.'

It now appears that Biden could be reversing his reversal by going forward with construction of the wall – at least in some parts.

Mayorkas says these new projects at the wall could include filling in 'gaps,' adding 'gates' and reconciling areas 'where the wall has been completed but the technology has not been implemented.'

Notes of the meeting show CBP, the agency that oversees the border wall, has submitted a plan for what it wants to see implemented.

Border and immigration agencies are struggling to find places for the mass amount of migrants.

While Biden's administration vows they are turning away the majority of adults and family units, they claim they will not turn away unaccompanied children arriving at the border.

A record 19,000 unaccompanied minors arrived at the southern border in March while thousands of adults are also risking their lives to try and get into the U.S. by way of Mexico.

Facilities at the border are overflowing with migrants, some reaching nearly 2,000% of its mass capacity.

A report filed Friday in a Los Angeles federal court, two inspectors appointed to monitor conditions of children in custody detailed 'severe overcrowding' that is further problematic in the midst of the coronavirus pandemic.

Social distancing was 'functionally impossible', the experts said, calling the overcrowding 'not sustainable.'

Trump received a lot of criticism for the border crisis under his administration where families were seen separated into different facilities when they arrived at the border.

Conditions were denounced as inhuman as children were pictured in cages.

The conditions, however, appear to be not nearly as bad as that under Biden, who has stopped border wall construction and issued more lax immigration policies since taking office.

Upon leaving Washington in January, about 460 miles of border wall were completed under Trump's presidency with funds directed after he declared a national emergency at the border so Pentagon funds could be used for construction.

Most was fixing or filling in areas where some sort of barrier already existed or replacing outdated designs or vehicle barriers that did nothing to stop people crossing on foot.

Trump was particular about his promised border wall, with some reports indicating he micromanaged several aspects of the construction, like color and design.

During his last few days as president, Trump visited his wall to celebrate 400 miles completed – where he also penned his name on a paper attached to the wall with his famous bold signature.

During Biden's campaign, he promised all migrants seeking asylum would be granted it in the U.S. This led to several caravans from Central America departing for the U.S. when Biden was named the presidential election winner.

Since taking office, the crisis at the border has surged.

With tears in his eyes, the migrant boy can be seen in the video walking towards the Border Patrol agent before he asked him if he could provide him assistance because he had been left stranded near the Rio Grande.

'It's that I was coming with a group and they abandoned me and I do not know where they are at,' the child told the officer.

'You do not know where they are at? They left you alone?' the agent asked.

The distraught child, struggling to maintain his composure, apparently had been sent to the United States by his parents, who were not part of the migrant group who had already advanced further along the desert area.

'At the end they abandoned me. I have come here to ask you for help,' the frightened boy said.

The Border Patrol agent then questioned the child if he had been instructed 'to come ask for help,' but the migrant boy replied, 'no, I am coming because if I did not, where am I going to go? Somebody could abduct me, kidnap me. I am scared.'

The incident reportedly took place east of Rio Grande City on April 1 after the border agent had finished his shift, his friend Anjel Hernandez wrote on Facebook.

Univision reported that the child, whose age and nationality have not been made public by U.S. Customs and Border Protection, spent the entire night trekking through the Rio Grande Valley region after his unlawful entry into the country.

U.S. Border Patrol El Paso Sector chief Gloria Chavez told the network that parents should think about their children's well-being each time they are sent alone to cross the perilous Mexico-United States border.

'To all parents who are considering sending their unaccompanied children to the border, please reconsider that act because it is very dangerous to expose children,' Chavez said.

Human smuggling networks, who according to NBC News, have used public Facebook pages to hawk their services to Central American migrants have warned parents that their children would be guaranteed access across the Mexico-United States border if they travel alone.

The sisters, aged three and five, were rescued by agents Tuesday and transferred to the Santa Teresa Border Patrol Station for medical evaluation.

Fox News obtained a photo Friday, that shows the girls interacting with Chavez, who handed them snacks at the processing center.

Official CBP figures show that apprehensions at the border have increased for 10 consecutive months, including the last nine of former President Donald Trump's administration.

President Joe Biden's administration has encountered a surge at the southern border over the last two months.

Government data shows that 171,000 migrants were caught by CBP at the United States-Mexico border in March, the highest monthly total in two decades. Border agents encountered at least 19,000 unaccompanied  children.

The preliminary tallies for March are the highest since the agency reported more than 180,000 encounters with migrants in April 2000.