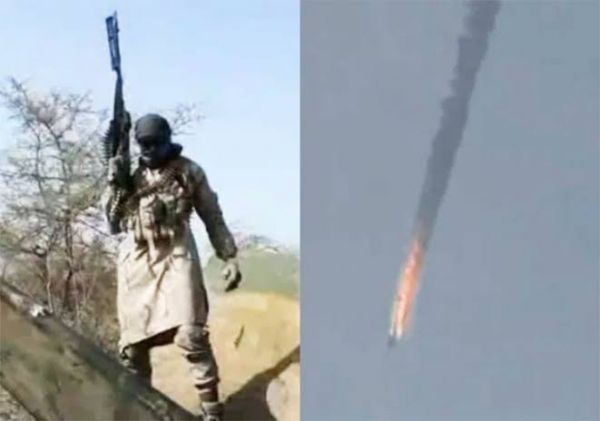 Hugo Kaaman, a Sweden-based security analyst, has accused the Boko Haram sect of taking a clip from a 2012 incident in Syria to claim responsibility for the missing jet of the Nigerian Air Force (NAF).

The NAF 475 jet deployed against the insurgents lost contact with radar in Borno State on Wednesday evening.

On Thursday, the Air Force named the pilots on bard the ill-fated aircraft which it said may have crashed.

However, on Friday, Boko Haram released a video showing what appeared to be the downing of the military aircraft by its fighters.

The group also showed a militant standing on what it claimed was the wreckage of the jet.

“Nigeria Air Force jet fighter… was sent to Sambisa to fight the Mujahideen,” the militant said.

Commenting on the video, Kaaman said the explosion was that of an incident involving SyAAF helicopter in 2012.

“Boko Haram just released a video claiming it shows a NAF jet shot down by the group. Looking at the video, it appears as if the jet explodes mid-air. However, this is not true. BH took a 2012 video showing a SyAAF helicopter exploding mid-air over Idlib and superimposed it. Weak

“Just to be clear, the jet really crashed. It’s unclear whether this was due to hostile fire or technical issues. The wreckage can be seen in the same Boko Haram video. This video merely highlights Boko Haram’s fake footage of the shootdown itself,” he said while comparing both videos.”

Edward Gabkwet, spokesman of the air force, had earlier said Boko Haram fighters were not capable of bringing down the jet.“Although the video is still being thoroughly analysed, it is evident that most parts of the video were deliberately doctored to give the false impression that the aircraft was shot down.”“It is obvious that the Boko Haram sect, in its characteristic manner of employing false propaganda, is seeking to claim credit for what was obviously an air accident that could have been caused by several other reasons; particularly at a time when the capability of the group to inflict mayhem has been significantly degraded by the Armed Forces of Nigeria,” he had said in a statement. Experts had earlier said that given the distance the air craft flew and where Boko Haram operated from, it is highly possible that the insurgents only took advantage of the mishap involving NAF.

“Bringing down an aircraft such as the one we saw will require serious precision and a ballistic missile; it was not a helicopter. But the fact that it went in flames mid-air showed that something happened,” Abubakar Ismail, a security expert, who reviewed the video, said.