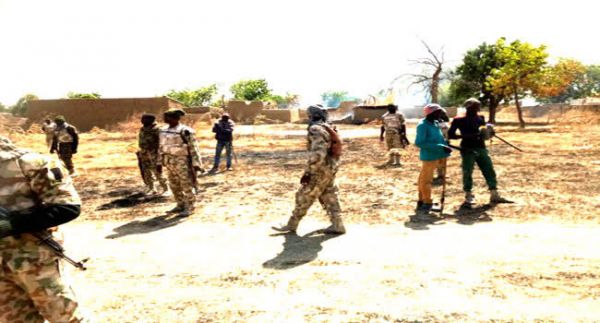 Bandits in the early hours of yesterday invaded a military base in Allawa, Shiroro Local Government Area of Niger State and killed five soldiers and a mobile policeman.

The entire military camp was razed by the bandits who invaded the base at about 2am when soldiers had just returned to the base from area patrol. They stormed Allawa village riding on motorcycles and brandishing AK 47 rifles.

After the invasion of the military base, the bandits reportedly moved to the communities where they killed seven people and abducted a number of villagers.

They were also said to have abducted over 10 persons, stole seven motorcycles and burnt military vehicles among others in the attacks that led the villagers  scampering for safety.

The bandits later stormed a camp of the Joint Security Task Force comprising the army, police, civil defence and vigilantes at Alawa and opened fire on them, killing five soldiers and one civil defence officer, while many sustained various degree of injuries.

A popular businessman in Bassa village, whose name was given as Sule, was also killed in his farm by the armed men who made away with several motorcycles belonging to the villagers.

Meanwhile, the army has recovered bodies of five fallen troops.

It was gathered the bandits only targeted the Joint Security Task Force base as the entire Allawa town is said to have been peaceful with people going about with their normal business.

Reports confirmed that the military, police, civil defence and the vigilance group, in the Joint Security Task Force camp, have all left the town and the camp shut down.

“Their intention is to rid the area of security presence so that they will always have a field day. We have been left on our own, nobody is coming to our assistance,” Koki said.

He said security agencies, including the commissioner of police and the brigade commander have been despatched to the area to verify and validate what happened.

In a fresh attack, bandits, yesterday, killed one each in Birnin Gwari and Kajuru councils of Kaduna State.

This was even as herders and cattle were attacked by mob in Zangon Kataf Local Government Area.

He was killed while working on his farm in Ungwan Fada, Birnin Gwari council.

In a separate incident, one other person, Yusuf Dallatu, was killed by bandits at Kasuwan Magani general area of Kajuru council.”