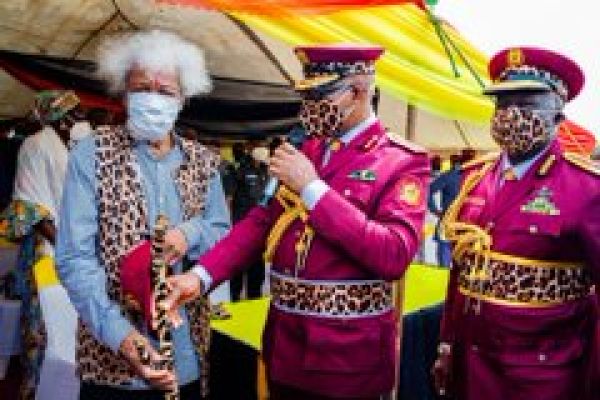 Nobel Laureate, Wole Soyinka, has been decorated as “Special Marshall” of Operation Amotekun in Ogun State.

Soyinka, a Professor of Comparative Literature and Nobel Prize winner for Literature in 1986, was honoured during the inauguration of the local security outfit on Thursday.

Governor Dapo Abiodun shared the pictures of the event on his official Twitter handle.

“I had the honour of inaugurating the indigenous security outfit, AMOTEKUN Corps in Ogun State earlier today. We also commissioned patrol vans and motorcycles.

“Led by Rtd CP David Akinremi, the Corps has as Special Marshall, Nobel Laureate, Wole Soyinka who was kind enough to grace the event.”

Although, the launch initiative triggered a controversy across the country as the federal government through Abubakar Malami, Attorney-General of the Federation, described the initiative as illegal.

The governors and the Minister later agreed to give legal backing to the initiative but said it won’t be a regional outfit as earlier conceived, but state-based.

They also agreed that the new initiative will be done in partnership with the police to deal with crime-related challenges.