Gunmen kill 31 as Buhari tasks military chiefs to be proactive 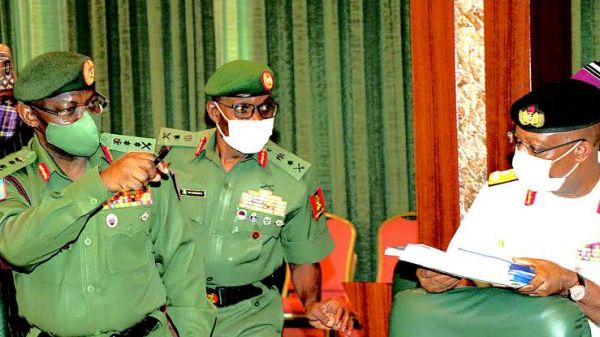 Thirty-one persons have been killed by criminals in Ebonyi, Benue and Adamawa states.

The killings took place between Monday and Tuesday, hours before President Muhammadu Buhari directed service chiefs to be proactive in addressing the security challenges.

The president, who tasked the service chiefs to identify and expose those behind heinous acts in different parts of the country, left for the United Kingdom shortly after his Tuesday meeting with the service chiefs held at the Presidential Villa in Abuja.

Experts opined that many attacks by criminals, including insurgents and bandits, could have been avoided if security operatives had been proactive in identifying and stopping such threats rather than waiting for the attacks to be carried out before acting.

Also on Monday night, 27 persons were reportedly killed when gunmen suspected to be herders attacked the people of Nkalaha, Obegu, Amaezu and Umuhuali communities in Ishielu Local Government Area of Ebonyi State.

Governor David Umahi and some local officials described the attacks as a reprisal. The governor had admitted that two Fulani herdsmen were killed by the locals about a year ago.

He said those behind the killing of the herdsmen had been arrested and wondered on the real reason behind the latest sporadic attacks on villages.

However, Fulani leaders in Ebonyi have denied the attacks insisting that they were not aware of what happened.

Our correspondent reports that a priest serving with the Methodist Church and many others went missing after the attack.

The locals said most of those killed during the night raid were farmers, motorcyclist operators and travellers.

Although the Ebonyi State Commissioner of Police, Aliyu Garba, was yet to make an official statement on the incident, it was learnt that the deputy commissioner of police in charge of operations had been dispatched to the area.

Reacting shortly after visiting the affected areas, Umahi said he was shocked and devastated.

“I got the shocking news this afternoon about the attack on four communities of Nkalaha, Obegu, Amaezu and Umuhuali  by AK-47 wielding herdsmen.

“As we speak, they are standing trial in Ebonyi State and the community and security agencies appeased the herdsmen and made peace with them.

“They vacated despite all efforts of my government, the governors of the South East and security agencies in giving them full protection not only in the state but in the entire region,” he said.

Umahi said they were tracing the attackers and would be apprehended.

“I will not disclose it but I am going to escalate the identities of the people to the highest authorities and we wait to see what they will do; but we condemn this attack. It is not only happening in Ebonyi…If it is allowed to go this way, it is capable of generating a serious civil war.

“I want to demand from the security chiefs to fish out these people because they are well known; they should fish them out to face the wrath of the law,” he said.

In an interview with our correspondent on Tuesday, a former councillor in Egedegede community, Vincent Ogbu, said the killing of a cow by the locals was the immediate cause of the latest attack.

He said the herdsmen stormed the communities between 6:30pm and 7pm on Monday.

“Yes, we had an issue with them (herders) because our village killed their cow. We are still negotiating knowing that there are crops worth millions of naira which they destroyed…Unknown to us, they were planning for a war.

“When they came, they started shooting at Egedegede Development Centre and blocked the road. As I speak with you, women and children are relocating to neighbouring communities for fear of further attack,” he said.

When contacted, one of the leaders of Miyetti Allah Cattle Breeders Association of Nigeria (MACBAN) in the state, Haladu Muhammad, said: “I am not aware of the incident, I just heard about it but I don’t know the details.”

Umaru Muhammad, who is also a member of MACBAN in the state, denied having any knowledge of the incident.

“I was just called a few minutes ago over the incident and I don’t know much about it and I can’t say if it is our people,” he said.

In Benue State, a Catholic priest, Reverend Father Ferdinand Fanen Ngugban and three others have been allegedly killed by bandits in Katsina-Ala Local Government Area.

It was gathered that Ngugban of the St. Augustine Aye Twar parish was shot to death in the early hours of Tuesday by the bandits who also burnt some houses in the area.

Chairman of Katsina-Ala LGA, Alfred Atera, told our correspondent by telephone that the bandits attacked the priest at the church premises, killing him and three others.

But the Police Public Relations Officer (PPRO) for Benue Command, DSP Catherine Anene, said only the priest was killed.

A politician from the village, Umaru Ardo, told our correspondent that the gunmen, who thronged the village in large number on Monday, overpowered the local vigilantes and operated unchallenged.

He said the bandits took away Alhaji Bajika who holds the title of Sarkin Shanu of Kojoli from his house at a Fulani settlement.

They also picked the village veterinary doctor, Dennis Malum, from his ranch/house near Nyagang settlement.

“For the records, the incidents have been reported to the police and investigation is said to have commenced,” Ardo said.

Kojoli village, located in a mountainous area about 3 kilometres from the Cameroon border, has over the years suffered from bloody attacks and kidnappings.

Attempts to speak to residents were successful due to poor telephone signal in the border area.

Police Public Relations Officer in Adamawa, Sulaiman Nguroje, confirmed the attack, saying only one person was kidnapped and that the police anti-kidnapping unit had been deployed to the area on rescue mission.

During the meeting he had with them yesterday, Buhari directed the security chiefs to fish out bandits, kidnappers and their sponsors.

Our correspondent reports that the president had given a similar directive a few weeks ago during the decoration of the new service chiefs. He told them to go after terrorists and other criminals instead of repelling them.

National Security Adviser, Babagana Monguno, who briefed State House reporters at the end of the meeting with security chiefs, said Buhari had warned that a situation whereby bandits and kidnappers continued to dictate the pace in the fight against insecurity would no longer be tolerated.

Monguno said the president expected the armed forces to be proactive instead of being reactionary. Munguno said: “After meetings with governors of the North-West and North- Central zones, Mr President decided to call for an emergency meeting with heads of defence and security organisations.

“Prior to this meeting, he had also met with chairman of the Nigerian Governors’ Forum on issues directly linked to the state of insecurity in the nation.

“Today’s meeting was not a very long meeting, but the president looked at certain issues that were presented to him in the last one week.

“Mr President, in particular, emphasised that the comprehensive reports he received from the Chief of Defence Staff and the service chiefs, following their recent appointment, has illuminated the need for him to look deeper into certain aspects that need to be taken care of.

“He is particularly inspired and impressed by the way the new service chiefs have started their assignment, with all the operational visits they have made to the theatre, where they have been able to address the troops, look into their immediate needs and come up with immediate, medium and long-term proposals.

“Mr President is going to look into these things with the urgency they require, but he is particularly delighted that from what he has received from the Chief of Defence Staff, there is now a renewed vigour, there is now a willingness on the part of all the operational elements to work together, as well as also working hand in hand with the intelligence organisations.”

The NSA added that: “On the issue of kidnapping and banditry, this menace still persists, especially in the North-West and the North-Central zones. Mr President has been very emphatic, he has stated very clearly that this problem must be brought to an end, but using the traditional methods that the armed forces have been trained to deploy.

“Mr President has made it very clear to both the intelligence and operational elements that the first assignment will be to identify the leaders of these bandits, kidnappers and take them out in order to restore confidence in those areas,” he said.

The meeting, held at the Council Chamber of the Presidential Villa, Abuja, was attended by Vice President Yemi Osinbajo; Secretary to the Government of the Federation (SGF), Boss Mustapha; Minister of Defence, retired Major-General, Bashir Salihi Magashi; Chief of Staff to the President, Ibrahim Gambari; and National Security Adviser.