Walter Onnoghen - remember him? Here, the former CJN tells of the lies, intrigues that made Buhari remove him from office 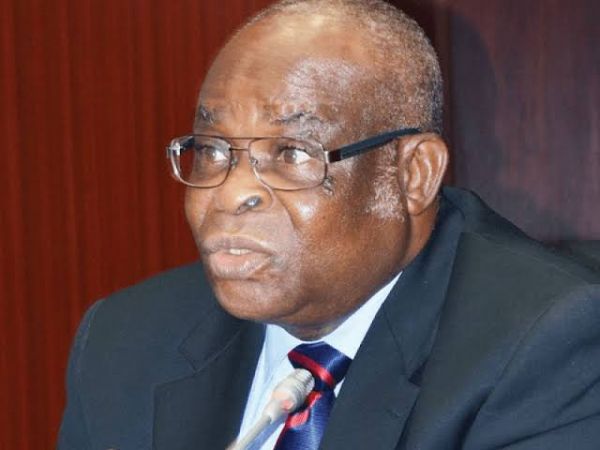 Walter Onnoghen on Friday opened up on his removal as the Chief Justice of Nigeria in 2019.

He had earlier made some passing comments about his ordeal at his 70th birthday which he marked quietly in Abuja on December 22, last year, the day he ought to retire from the bench if he had his tenure in full.

But he spoke in more details about his travails at a book launch held on Friday in Abuja, where he denied some allegations and speculations that were said to have motivated President Muhammadu Buhari’s administration to move against him.

For instance, he denied ever meeting former Vice President, Atiku Abubakar, who was Buhari’s main rival in the 2019 general elections.

He also faulted the allegation that he, as the head of the Supreme Court, was setting corruption suspects free.

Buhari levelled this allegation against him while announcing his suspension in January 2019.

But denying the charges on Friday, Onnoghen said, “Prior to my suspension, I was confronted with no allegation. There were rumours that I met with Atiku in Dubai.

“As I am talking here today, I have never met Atiku one on one in my life. As if that was not enough, I was also accused of setting free, high-profile criminals, whereas I ceased to be a High Court Judge as far back as 1978.

“In Supreme Court, I did not sit alone. we sit in panel. In all these rumours and outright accusations, I was not given opportunity to defend myself.”

Buhari had on January 25, 2019 suspended Onnoghen following a controversial ex parte order issued by the chairperson of the Code of Conduct Tribunal (CCT), Danladi Umar.

The integrity of the ex parte order of suspension was later questioned by the Court of Appeal in Abuja.

Umar issued the ex parte order on January 23, 2019 preparatory to the trial of then CJN on charges of failure and non-declaration of assets earlier filed against him by the Federal Government, through the Code of Conduct Bureau (CCB).

While being prosecuted at the CCT, Onnoghen was also going through disciplinary proceedings at the National Judicial Council (NJC).

Just before the CCT trial came to an end, Onnoghen tendered his letter of voluntary retirement.

On April 18, 2019, the tribunal convicted him and, as punishment, ordered his removal from office, barred him from holding public office for 10 years and ordered the forfeiture of the undeclared assets.

NJC did not make its report public, but on October 6, 2019, it issued a statement announcing that the President had accepted his voluntary retirement.

Speaking about his travails on Friday, Onnoghen said the period of his ordeal was the darkest era in the history of the judiciary in Nigeria.

But he urged serving judges not to be discouraged but to remain courageous.

He said, “Let me make it clear that the office of the CJN was not for Onnoghen but for all Nigerians who had sworn to guide and protect the Constitution of the Federal Republic of Nigeria.

“To say the least, the period of my ordeal was the darkest era in the history of the Nigerian judiciary

“As I have said severally, Judicial officers must be courageous. And I want to beg all serving judicial officers not to be discouraged by what happened to me in the hand of the Executive arm of the government.

“Emerging Nigerian judges should not go the direction of injustice because without courageous judges and justice, Nigeria is doomed.”

“Here, let me sound this note of warning that the appointment of judicial officers must never be allowed to be politicised, otherwise, democracy and democratic governance will be dead.”

‘Be committed to rule of law’

Onnoghen said the problem during his time as the CJN was not the judiciary but those who had no regard for the rule of law.

He therefore enjoined judges to be committed to the rule of law.

“During my tenure, the problem of Nigeria was not the Nigerian judiciary, but those who had no regard for the rule of law. We must therefore be committed to the rule of law and dispense justice without fear or favour.

“Truth stands, crush it, it will stand because it is truth.”

The author of the book, James Onoja, a Senior Advocate of Nigeria, was one of the lawyers that defended him at both the CCT and the NJC.