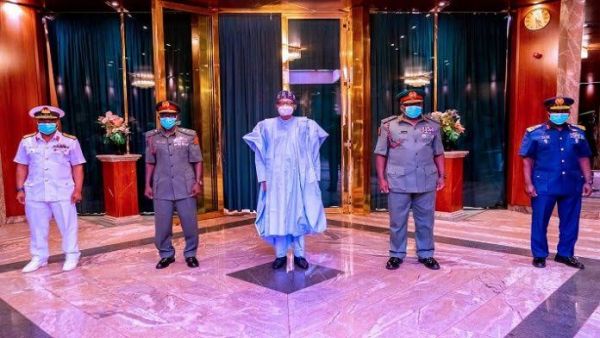 President Muhammadu Buhari has told newly appointed service chiefs to deliver on their mandate to guarantee security especially before the start of the rainy season to enable farmers go back to their farms.

Buhari, who spoke Friday at a ceremony to decorate the new service chiefs with their ranks at the State House Abuja, charged them to speed up their actions in freeing the country from the current state of insecurity.

“During our four-hour security meeting, on Tuesday, I had taken the responsibility as Commander-in-Chief for you to go out into the field and secure the country.

“You have got a few weeks to do that because by the rainy season, we expect people to develop confidence and go back to the land, so that we don’t get into trouble by being away from the field and therefore unable to produce enough food for the nation,” the President said.

Buhari, who told the service chiefs to see their appointment, clearance and decoration as a vote of confidence on them, gave an assurance of his firm support as they delivered on their responsibilities.

“For those (of you) that have been confirmed by this ceremony, the decoration, in front of your spouses, is a further confidence loudly expressed on you on behalf of the nation, to respond to the insecurity the country is in, and the nation looks up to you for rapid relief.

“I have accepted responsibility for your actions in the field; it’s up to you to identify your competent officers irrespective of seniority and paper qualification and deploy them to make sure that we secure this country.

“We all look forward to you to perform and I as the Commander-in- Chief, I am backing you hundred per cent, and I expect you to effectively deploy your officers and men to secure the country,” the President said.

Responding on behalf of the other service chiefs, Chief of Defence Staff (CDS), Lucky Irabor assured the President that they will not fail in their responsibilities as the mandate is clear.

“Nigeria will have peace again. Based on the mandate, we will address all issues, working with all other security organisations,” he said.

While fielding questions from State House reporters, Irabor declared that the Nigerian military will never demand peace and security of the country from “the terrorists”.

The CDS, while reacting to a question that sought to know the role played by the Nigerian military in the recent negotiations that led to the release of the school children from their abductors, said: “Peace and security is not just the security of the borders alone. It comes with having to build bridges across various divides.

On what to look out for in few weeks as directed by the President and the expectations of Nigerians in 100 days, he said: “That is a matching order that Mr President has given to us and we will work assiduosly to achieve that.

“No doubt, next 100 days is not as important as today. I believe that as members of the Armed Forces working in concert with the rest of the security agencies, we will bring Mr President’s expectations to bear in terms of our task. But let me also let you know that the inevitable is that Nigerians will indeed experience peace and security across the land.”

Irabor, while speaking on the next big step and whether there would be a change of strategies, said: “I’m glad you talk about the next big step. Nigerians expect us to bring about peace and security in concert with other security agencies, that we will do. We can’t live in fear. And we will ensure that whatever brings fear to Nigerians before now will be a thing of the past.

“Strategies are not sancrosant. Of course, there are dynamics that we need to begin to look at, what needs to be reviewed, and that is precisely what we are doing currently. And we review various strategies and of course come up with new ones to be able to meet the demands of the current realities.”

He refused to speak on what he called the”trump card” to achieve the target set.