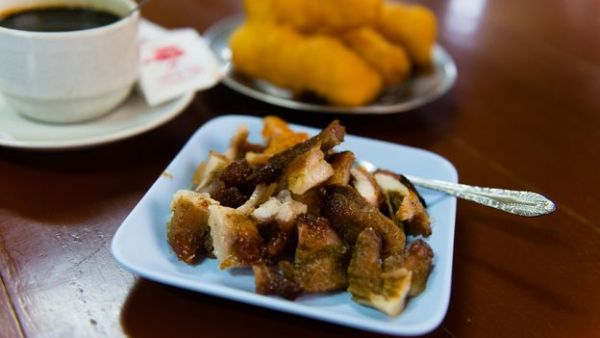 In this southern Thai city, people wake up before 04:00 and flock to dim sum halls, vintage cafes and street food vendors for their early morning fix.

It was almost midnight in the southern Thai city of Trang, and I was staring into an oven the size of a tuk-tuk. Flames and smoke were shooting out of the top, and men were carefully lowering two full-grown, slaughtered pigs into the fiery abyss. An hour later, they would be pulled out, smoking, crimson, crispy and fragrant. When cool enough to handle, the pigs would be portioned, chopped up and displayed for sale at Trang’s central morning market by about by 04:00.

There aren’t many places in the world where people are willing to accommodate the logistics required to roast entire full-grown pigs every day. But there also aren’t many places in the world that are as serious about breakfast as Trang. Even in an utterly food-obsessed country like Thailand, the city’s enthusiasm for the first meal of the day can seem almost pathological.

In Trang, you can kick off your day at immense dim sum halls; decades-old restaurants selling steaming bowls of noodles and rice porridge; cafes and stalls boasting trays of curries, stir-frys and soups; street-side vendors hawking crispy, deep-fried sticks of dough; and most famously, stalls selling local-style roast pork by the kilogram. It’s fun, indulgent, delicious and overwhelming. But why breakfast and why Trang?

“Restaurants in Trang accommodate the various types of workers here,” explained Khanaporn Janjirdsak, a Trang-based restaurateur and amateur food historian, when I asked her why Trang was so mad about breakfast. “Rubber tappers wake up at 02:00, people who run restaurants go shopping for ingredients at 05:00; people here are eating all the time!”

Rubber is an important crop in the countryside surrounding Trang, Khanaporn told me, and the fact that rubber sap must be gathered in the morning hours had led to a robust – and very early – breakfast culture. In some cases, she said, rubber tappers may have already eaten two meals before the sun has risen.

Another factor that has shaped the city’s breakfast scene is immigration. Since the 15th Century, trade, commerce and the prospect of work have drawn Chinese immigrants to various points along Thailand’s Andaman Sea coast. Trang became home to a disproportionate number of these, and as a result, it just might be the most Chinese place in Thailand: a virtual melting pot of Chinese culture, with Hakka, Hokkien and Teochew among the regional Chinese languages spoken there. Yet, it’s the Cantonese who have had the biggest impact on Trang’s breakfast.

“In the old days, people would just come and drink tea,” explained Yaowanee Thirakleela, the fourth-generation Cantonese owner of Jip Khao, Trang’s most longstanding and revered venue for dim sum. We were sitting in her restaurant, which at 07:00, was already packed with families, schoolkids, pensioners and people on their way to the office. “There weren’t many things to eat with the tea; a couple steamed dumplings, maybe deep-fried sticks of dough.”

Yet over the decades, Thirakleela told me, Trang’s teahouses started to offer more food items, ultimately making the transition to full-fledged restaurants. Today, the city is synonymous with vast dim sum halls that offer dozens of steamed and deep-fried options, as well as noodles and rice dishes. But Jip Khao is one of the few that has maintained a relatively small menu of dim sum items, all made in-house and steamed in the traditional style in a wide tray rather than in tiny bamboo baskets.

Cast aside any notions of delicate, jewel-like, seafood-based dumplings; Trang-style dim sum is homely and hearty, the almost exclusively pork-based fillings given a seemingly Thai-influenced oomph from generous additions of garlic and white pepper. And remnants of Chinese tea culture can still be seen in the drinks station standard at Jip Khao and its counterparts, where mostly sweet cups of coffee and tea are poured through a sock-like cloth filter. Thirakleela is proud that her restaurant is perhaps the only one in town that continues to serve Chinese tea the old-school way – from cup-like teapots and spiked with fragrant chrysanthemum petals.

“In my father’s time, they drank lots of tea,” she told me. “They could eat fatty food and still live long lives!”

The fatty food Thirakleela was referring to was, undoubtedly, Trang’s famous roast pork. Although the dish has its origins in Chinese festivals and celebrations, it has become synonymous with Trang, and these days is sold from stalls at the municipal morning market and dim sum halls alike, a staple indulgence for locals and a must-eat item for visitors. The pigs, deboned, scored deeply and rubbed with a sweet, fragrant five-spice-based marinade, emerge from ovens like the one I witnessed that night with an almost tooth-shatteringly crispy skin, firm, candy-like lean meat and a layer of fat that, when done well, is at the verge of melting.

“You don’t need a dip for Trang-style roast pork,” said Janjirdsak, when I asked her to describe her city’s signature dish. “It’s already seasoned – the taste is already perfect.”

Instead, diners at Trang’s popular dim sum halls like Trang Moo Yang and Phong O Cha 1 pair tiny plates of roast pork with steamed buns and the clockwork of meat being hacked apart with a giant cleaver. Street-side, and at Trang’s central morning market, a brisk trade is done in take-away boxes of roast pork, with customers pulling up on motorcycles, shouting an order for a kilogram or two, and speeding away without having even disembarked.

Only second to dim sum and roast pork is Trang’s affinity for sticks of deep-fried dough – yet another Chinese breakfast staple.

“I get up every day at 03:00 to prepare the dough,” explained Somyot Athakijmongkol, the second-generation owner of Kun Chiang Bang Rak, a tiny, shophouse-bound, breakfast-only restaurant that serves what are arguably the best sticks in town. “I start frying the dough at 06:00. And we usually sell out by 09:00.”

Athakijmongkol spoke to me as he shaped, flipped, pinched and divided a mound of almost ethereally soft, pale dough. After the mass had been transformed into a row of approximately cigarette lighter-sized sticks, he took two and stuck them together, which he slid into a vast wok of hot oil, flipping crosses with long chopsticks until glassy and golden.

“Ours are longer, crispier – they stay crispy a long time,” he told me, when I asked what made his product superior, “and they’re soft inside.”

Such is the ubiquity of deep-fried sticks of dough in Trang that on top of the table of any dim sum hall is dispenser holding squares of thick, coarse gray paper. Locals know to use these to dab excess oil from sticks of dough and, I was told, to jot down figures while talking business over dim sum.

But Trang’s breakfast scene isn’t limited to Chinese dishes. Like much of southern Thailand, the city has a significant Muslim population, and from a string of open-air halal restaurants near Trang’s train station, vendors sell flaky, crispy, fried flatbreads known as roti, pairing them with fragrant curries of dried spices that are more India than Thailand. Nearby, ethnic Thais, who, ironically, have probably had the least impact on Trang’s breakfast scene, operate curry stalls, establishments that boast dozens of trays of pre-made curries, stir-frys, soups and other dishes. Although typically lunch fare elsewhere in Thailand, in Trang, these dishes are considered breakfast.

It was at Ko Lay, a Thai-run curry stall on Thanon Kan Tang street that typically sells out as early as 09:00, that I fell into conversation with the owner, Thanatip Boonyarat.

“The people of Trang have a reputation as serious eaters,” she told me. “People elsewhere [in Thailand] eat three maybe four times per day, but people in Trang eat nine times a day!”

It was, admittedly, my second breakfast that day. Clearly I was starting to understand the local approach to eating.