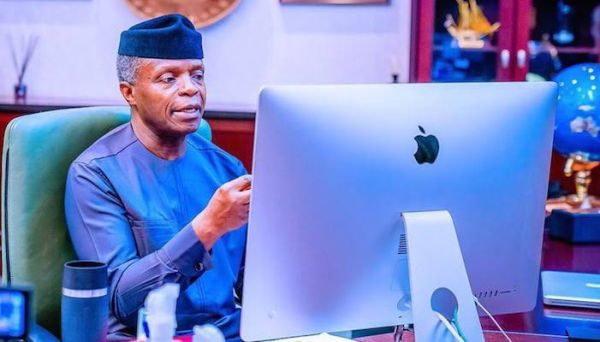 Vice President Yemi Osinbajo has called for the regulation of cryptocurrency transactions in the country, saying banning it outright would not be a better idea.

Osinbajo made the remark while delivering a keynote address at the CBN Bankers Committee Economic Summit held virtually on Friday, according to a statement issued by Laolu Akande, his spokesperson.

“Rather than adopt a policy that prohibits cryptocurrency operations in the Nigerian banking sector, we must act with knowledge and not fear and develop a robust regulatory regime that is thoughtful and knowledge-based,” Osinbajo said.

While emphasising the need for monetary authorities to rethink their stand on cryptocurrency, Osinbajo said “there is no question that blockchain technology generally and cryptocurrencies, in particular, will in the coming years challenge traditional banking, including reserve (Central) banking, in ways that we cannot yet imagine.”

“So, we need to be prepared for that seismic shift. And it may come sooner than later,” he added.

The vice president’s comments come about three weeks after CBN on February 5 directed all financial institutions in the country to close all cryptocurrency-related accounts and transactions.

The ban sparked controversies amidst concerns over its effect on fintechs, and the rising potential for the Nigerian economy. Nigeria is the world’s second-biggest user of virtual currencies.

Days after, Securities and Exchange Commission said it had also suspended the approval of cryptocurrency and related products.

The vice president noted that already remittance systems are being challenged and that blockchain technology will provide far cheaper options to the kind of fees being paid today for cross-border transfers.

“I am sure you are all aware of the challenge that the traditional SWIFT system is facing from new systems like Ripple which is based on the blockchain distributed ledger technology with its own crypto tokens,” he said.

He said there are, of course, a whole range of digital assets spawned daily from block-chain technology and that decentralised finance, using smart contracts to create financial instruments, in place of central financial intermediaries such as banks or brokerages, is set to challenge traditional finance.