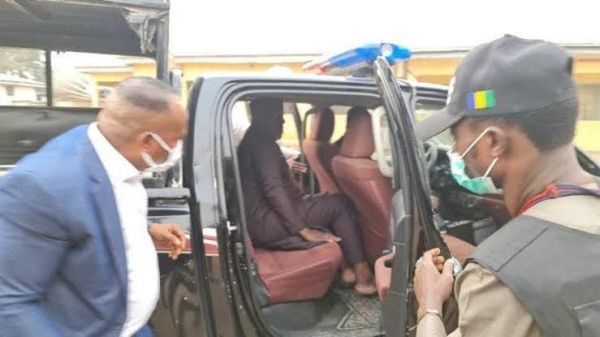 While Igboanusi was the deputy chief of staff (Domestics), Okafor-Anyanwu was the commissioner for Transportation when Okorocha, who is the current lawmaker representing Imo West (Orlu Senatorial Zone), held sway as the state governor.

This was as the former governor claimed that the incumbent Imo State Governor, Hope Uzodimma, attacked him (Okorocha) with 1,000 thugs.

Okorocha was arrested on Sunday after unsealing the Spring Palm Estate linked to his wife, Nkechi.

The ex-governor had stormed the estate with his supporters, policemen, soldiers and personnel of National Security and Civil Defense Corpse on Sunday morning and ordered the unsealing of the estate.

Government officials had mobilised to the estate, leading to a free-for-all, as cars were smashed and many persons injured.

A police source, who confided in our correspondent, said that the former governor had been arrested.

The source said, “Rochas Okorocha has been arrested. He is here with us at the state CID. Two of his political associates are also with us. We will record him any moment from now. They are currently meeting with the CP.”

Meanwhile, Okorocha on Sunday alleged that Uzodimma attacked him with “more than 1,000 thugs.”

Okorocha, who spoke through his Spokesperson, Sam Onwuemeodo, in a statement on Sunday, alleged that the governor’s Special Adviser on Special Duties, Chinasa Nwanari, allegedly led thugs, who stormed the estate and destroyed vehicles in his convoy.

The statement read, “More than 1,000 thugs, armed to teeth with knives and guns and led by Chinasa Nwaneri, Uzodinma’s Special Adviser on Special Duties today, Sunday, with the backing of armed policemen from Government House, attacked the former governor of the state and Senator representing Imo West Senatorial District, Okorocha’s convoy.

Responding, the state Commissioner for Information, Declan Emelumba, dismissed Okorocha’s claim, adding that the former governor’s arrest was in line with the report of a White Paper, which indicated that the Royal Palm Estate in the state was built with taxpayers’ money and not Okorocha wife’s property.

Explaining that Okorocha would be charged to court on Monday, Emelumba said, “There was a judicial panel of inquiry that looked into land use and related matters set up by the Emeka Ihedioha administration, which we inherited and retained. They came up with a report and government accepted it, and then turned it to a White Paper.

“Part of the White Paper’s report indicates that the Royal Palm Estate was built with taxpayers’ money, but Okorocha claims it is his wife’s. However, the report says it was built with government money.

“The facility even violated Owerri master plan as well. Two days ago, the state government went and sealed the place in accordance with the White Paper. Then today, Okorocha, on his own, led thugs and carried hammer to unseal what government sealed off in line with the dictates of the law.

“He (Okorocha) was there, saying he is daring Uzodinma to come and stop him if he (Uzodinma) has courage. This is lawlessness. So, police went there and caught him in the act and arrested him and some of his aides. He (Okorocha) would be taken to court tomorrow.”

On the allegation that Uzodimma attacked the ex-governor with over 1,000 thugs, Emelumba described the claim as lie.

When contacted, spokesperson for the state Police Command, Orlando Ikeokwu, confirmed the arrest of Okorocha.

Asked if the former governor would be arraigned, Ikeokwu said, “Nobody is above the law. If he is found culpable, we will arraign him at the conclusion of the investigation.”