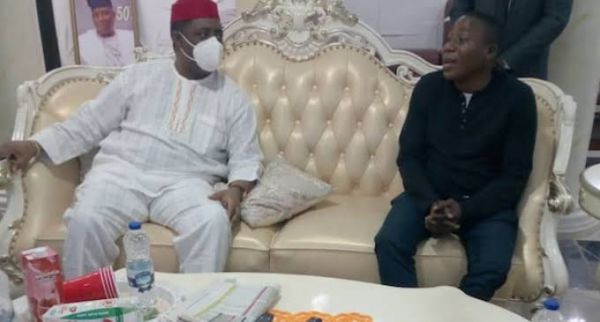 Former Minister of Aviation and a a chieftain of Peoples Democratic Party (PDP), Femi Fani-Kayode, has thrown his weight behind the call for Fulani herdsmen to be licensed to carry AK-47 rifles to protect themselves and their cows, saying it would  also afford other Nigerians an opportunity to do the same. He said if such a licence is ever considered it will make it automatically expedient for other local residents to also enjoy the same privilege of bearing arms to also protect themselves against killers, bandits and rampaging herdsmen. Fani-Kayode while speaking with journalists during a solidarity visit to Sunday Adeyemo, also known as (Sunday Igboho) at his Soka, Ibadan residence, Thursday, said the best way to resolving the security challenges in the country would be for the government at all levels to do the needful, which is to find a lasting solution of providing security for the people as constitutionally expected so that people won’t have to be considering bearing arms. The former Minister who had a closed-door meeting with Adeyemo for more than three hours, said if the government had been alive to its responsibility of protecting the lives of the citizens, people like Sunday Igboho won't emerge to show bravery and resist the continuous killings, raping and destruction of farmlands by suspected herders, especially in the Southwest. While describing Adeyemo as a freedom fighter, he said the whole of the Yoruba nation is solidly behind him and his mission to ensure that the people are safe and free from killer herdsmen, adding that Igboho is not against any particular tribe, ethnic or people. He said, “A good friend of mine, the Governor of Bauchi state, Bala Mohammed, we served together as ministers, he said a few days ago that Fulani herdsmen should be given the right to carry AK47. “Now, I disagree with that, but that was his opinion and like I told him, he is entitled to his opinions and he can voice it. “If you go by that principle, then it makes absolute sense that if Fulani are allowed to carry AK-47 to defend their cows and their lives if they feel threatened, then it is also logical for members of the local communities, farmers and each and every one of us should also have that right to defend ourselves against killer Fulani herdsmen and against those that are coming to kill us and rape our women. “So, I am totally and completely behind that and I will like that very much. Why not? We are responsible and decent people, the Americans have that right, it is enshrined in their constitution and if it is also that we could carry arms, perhaps we won’t have the kind of atrocities that are being committed throughout the country and not just throughout the South, even in the North itself, I must tell you, it is unbelievable what is going in terms of these killers killing members of the local population. “Perhaps that is one way to solve the problem, but the best way is for the government itself to rise up and do something about it. That is what we are paying them for, that is what they are there to do, let’s hope they do it and so we don’t have to do it ourselves.” He also aligned with the call of Minister of Defence on the people to defend themselves against banditry and killings saying the likes of Sunday Igboho have proved that the people can stand up for themselves. On his visit to Adeyemo, he said, “My purpose is to come and stand side by side, shoulder to shoulder with someone I have immense respect for. He has shown the world and most importantly, he has shown Yoruba people that we are not cowards, we are not people who can be pushed around, we are not people who can be pillaged, killed and raped, and those that perpetrate this crime feels at ease in our land. “So, I have come to express my appreciation and solidarity with somebody that I believe has done the right thing without violating any laws in this country because that is very important. I don’t believe he has done that. “I believe it is right and proper for every Yoruba leader to show appreciation for the lives he has saved and for his pursuits of people that have been committing crimes, that is the first purpose. “The second purpose is also to let him know that his message of peace and unity, that is to say, he has nothing Fulani people but he has everything against criminals that comes to our forest in this part of the country to come and kill, those are his enemies, those are the people that are our collective enemies and that is what he is fighting against and there is nothing unlawful in that.” While appreciating his visitor, Adeyemo said, “I don’t have anything to say for now, my Uncle (Fani-Kayode) has said everything for me. What we want in Yorubaland is peace. We don’t want banditry, we don’t want Fulani herdsmen to continue to kill our people, we want our people to be free. “My message to my people in Yorubaland is that they must try to defend themselves. Don’t let anyone come to your farm or your home to come and kill you, you must try to defend yourself which was what the minister said too.”