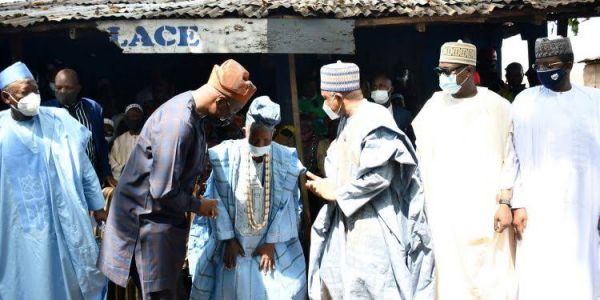 Nigerian Governors Forum (NGF) says last weekend’s conflict at Shasha Market in Ibadan was not a tribal or ethnic conflict.

Governor Abubakar Bagudu of Kebbi who made the declaration on behalf of the Forum after an on-the-spot assessment on Tuesday said ”it was the handiwork of miscreants who set out to loot, steal and cause mayhem”.

Several people lost their lives after a clash triggered by the fatal stabbing of a cobbler by a cart pusher in Shasha market, Ibadan, Oyo State.

The two men had a misunderstanding on Thursday and in the process, the cart pusher stabbed the cobbler with a knife.

The stabbed victim was confirmed dead in a hospital on Friday morning, leading to crisis in the community between the Hausa and the Yoruba.

Within hours, the conflict spread beyond the market, as the Hausa and Yoruba communities in Akinyele Local Government Area, where the market is located, went after each other.

Witnesses reported that, at least, six people died from both sides in the reprisal attacks. Various shops and houses were burnt while the market was deserted in the process.

Governor Bagudu described the crisis as a regrettable spontaneous incident.

With him at the on-the-spot assessment were Governor Abdullahi Ganduje of Kano State, Governor Abubakar Bello and Governor Bello Matawalle of Niger and Zamfara States, respectively.

NGF mandated the four governors to visit Oyo State and ”rub minds with their Oyo State counterpart, Governor Seyi Makinde over the conflict in which lives were lost and property destroyed.

Bagudu admonished youths and social media warriors and influencers to desist from painting the conflict as tribally-motivated and to also discontinue the fanning of the embers of discord that could destabilise the country.

He noted that normalcy had returned to Shasha community as leaders there were working together to put the incident behind them.

The Kebbi Governor said “the streets of Ibadan are calm; there is no one chasing another and people are supporting one another to ensure normalcy’’.

He noted that such skirmishes were bound to happen in communities, but that “sometimes they are exploited by miscreants to loot, steal and to cause mayhem.

“At Shasha Market, we saw the destruction, but more than the destruction was the regrettable loss of lives that were caused by an unfortunate and condemnable spontaneous response to emotions.

“Everyone in the community recognised that two issues led to the crisis.

“First, there had been contention over the leadership at Shasha Market.

“Both the Seriki and Baale of Shasha are in agreement about the leadership tussle, but other interested groups were not, hence, there was an undercurrent for trouble to brew.

“What was the trigger? There was somebody pushing a wheelbarrow with tomatoes and the items fell in front of a shop. Ordinarily, that is normal in markets.

“But when emotions rose and social media posts instigating crisis became strident, we had the situation we had.

“We sympathise with those who lost their lives and property. Also, we appreciate what Makinde, community leaders, security agents, youth groups, have done so far.

“We are also glad that the Seriki and Baale of Shasha are firm that everyone is free to stay and conduct his or her lawful activities.”

Bagudu said Makinde had assured that he would continue to engage the people to ensure that all communities lived without fear.

“As we speak, it is certain that some people are hiding and experiencing fear about what will happen.

“So it behoves us to ensure that we communicate properly.

“This will make those living in fear to know that the NGF, President Mohammadu Buhari and security agencies are working hard to ensure that we treat things for what they are,’’ Mr Bagudu said.

He also expressed satisfaction that the Oyo State governor was rendering assistance, assuring that NGF would support him.

“In fact, we have given a token to support those who are already displaced. We will meet at a wider forum on Wednesday and I’m sure more support will be mobilised,’’ he said.

Meanwhile, the NGF delegation had earlier visited the palace of Baale of Shasha, Akinlade Ajani and the Seriki of Shasha, Haruna Maiyasin, where they described the unfortunate incident as not good for nation-building.

The two leaders sued for peace and urged the government to assist in restoring lasting peace to the area.