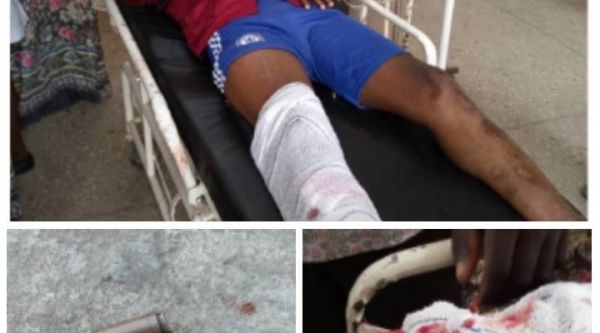 The DPO, it was learnt, ordered the arrest of two operatives of the Amotekun Corps for arresting herdsmen whose cattle were grazing on the farm in Gambari, allegedly destroying crops in the process.

The aggrieved farmer was said to have reported the case to Amotekun in the area and the herdsmen were arrested.

But some of the herdsmen were said to have reported the case to the DPO who ordered the arrest of the two Amotekun operatives, Jenyo and Olatunji Mayowa, who were investigating the case.

It was gathered that the DPO said the Amotekun was not set up to arrest herdsmen but to go after armed robbers.

The unit Commander of Amotekun in the area, Araoye Amoo, was said to have gone to the police station with his men to secure the release of the two officials.

He was discussing with the station guard when the DPO stormed out of his office and reportedly collected a gun from a policeman and shot one of the Amotekun men in the leg.

The DPO repeatedly claimed that he overheard the Amotekun corps say they were coming to the station to kill him.

The unit commander said one of the Amotekun corps who escaped from the scene was pursued and disarmed.

Araoye said the police checked and discovered that the gun which was forcefully collected from the Amotekun was not even loaded.

The unit commander, in a video said all the guns which his men carried to the station were not loaded because they did not go there to fight but to secure the release of those arrested.

The Amotekun commandant in Oyo State, Olayinka Olayanju, confirmed the incident to our correspondent, adding that the injured Amotekun official had been taken to the LAUTECH Teaching Hospital, Ogbomoso.

He said, “The DPO arrested and detained our men that arrested herdsmen. The unit commander led some of his people there to ask for the release of his men but the DPO was said to have shot them. One of them was injured and he is on admission at LAUTECH Teaching Hospital.”

Police Public Relations Officer in Oyo State, Olugbenga Fadeyi, later said in a statement the Fulani reported that some Amotekun operatives wanted to set their settlement on fire and some policemen who were deployed there brought the Amotekun men to the police station.

He was however silent on the shooting of the Amotekun operative.

The PPRO said, “It was a report from Secretary of Miyetti Allah, one, Oroji Allah ‘m’ at Orile Igbon Police Station that some Amotekun operatives planned to set ablaze Fulani ‘Igaa’. A team of policemen was sent to the scene and brought them to the station for amicable settlement by the DPO.

“Not too long, Amotekun corps numbering about 30 invaded the station and conducted themselves in an unruly and riotous manner. Three of them were arrested. The Area Commander Ogbomoso is handling the matter.”