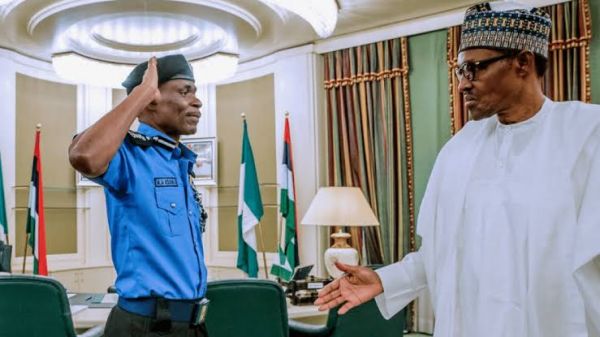 President Muhammadu Buhari is expected to name a new Inspector-General of Police as the incumbent police chief, Mohammed Adamu, is due to take a bow out of service today, multiple sources told Daily Trust yesterday.

As the president’s action is being awaited, prominent socio-cultural groups and civil society organisations have called on the president to do the right thing and stick to the rule of law in taking his decision.

While the IGP’s days in the police are officially up, on account of attaining 35 years in service, the president has the pejorative to extend his stay.

But informed sources told our reporters last night that the president is unlikely to give Adamu the fiat to stay beyond his statutory service age.

A top source at the Presidency told Daily Trust that Adamu is expected to hand over to the most senior police officer, in the event no announcement was made before the end of Monday.

“This is a post that has limit. If a position like that is given to you, the expectation is one leaves at the due date except if there is an instruction to the contrary. Right now there is no such communication,” he said.

Multiple sources told one of our reporters that Adamu’s fate was sealed on Wednesday after the president was briefed on the vacancy in the police top post by Minister of Police Affairs Maigari Dingyadi, at the end of the Federal Executive Council (FEC).

A spokesperson for the Ministry of Police Affairs, Ehisienmen Osaigvo, did not respond to a request for comments on this story last night. Presidential spokesman, Femi Adesina, declined comment when contacted by our reporter.

But a credible security source revealed that the presidency had directed the Police Service Commission (PSC) and the Department of States Security (DSS) to prepare confidential briefings on seven senior police officers on the rank of DIG and AIG.

It was gathered that course mates of IGP Adamu, serving in various positions in the Police Force, had reportedly vacated their offices as of last night. Sources in Abuja and other places said the IGP’s mates, including a former chairman of the Economic and Financial Crimes Commission (EFCC), DIG Ibrahim Lamorde, DIG Michael Anthony Ogbizi, AIG Mohammad Mustafa have emptied their offices in preparation of quitting the Force today.

Despite these developments, Adamu is said to be still staying put in his post with some of his promoters urging for a six months extension for him.

Checks last night indicated that Adamu was still occupying the IGP’s official residence in Maitama, Abuja, while he was yet to vacate his office.

A source at the Ministry of Police Affairs told one of our reporters last night that the presidency will announce a new acting inspector general of police today (Monday).

“Everything is concluded, you should just wait for the appointment from the Villa,” the source who asked not to be named for fear of sanctions said.