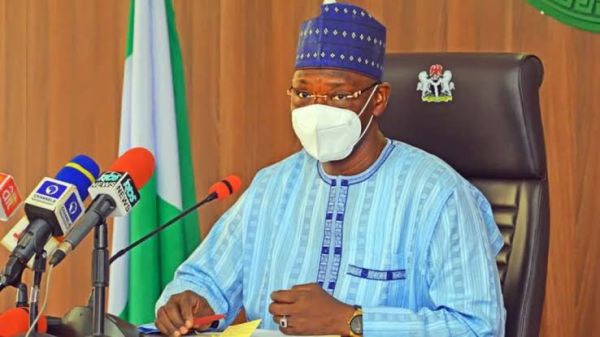 Governor Abdulahi Sule has confirmed the presence of Boko Haram terrorist group in Nasarawa State. They are regrouping and causing havoc amid security challenges, the governor says.

Governor Sule disclosed this on Friday while briefing State House reporters after a meeting with President Muhammadu Buhari at the Presidential Villa, Abuja.

The governor, who said the group was part of the elements fueling the security challenges in the State, recalled that the terrorists had been dislodged from their camp in Toto before regrouping at the Nasarawa/Benue border from where they are now launching attacks on residents.

Sule, who said some of the Boko Haram elements active in Nasarawa State belong to the Darussalam group that had been dislodged from Niger State, disclosed that a lot of them were hitherto killed while 900 were arrested upon a joint security operation.

He said their membership of the Boko Haram insurgency group was confirmed by those arrested, expressing confidence that action would be taken to curtail the menace having briefed the President on the situation.

He said that his meeting with Buhari focused on the insecurity issue and the possible federal government take-over of Jitata road, which serves as an alternative route from the state to Federal Capital Territory (FCT).

Sule said: “I have come to see the leader of our party, the leader of the nation, and our father, Mr President, to brief him about some of the activities happening in my State, especially first in the area of security that we continue to have challenges with a team of Boko Haram who had settled at the border with the FCT.

“And we thank the security forces that they have been able to dislodge them. But now, they have gone back and gathered at our border with Benue. And they are causing a lot of havoc. Therefore, it (this meeting) was an opportunity as Mr President wanted to know and I briefed him. I strongly believe that just like decision was taken last time to take care of this issue, another decision will be taken.”

The governor, while reacting to a question that sought to know if he was able to confirm that they were Boko Haram and not bandits, said: “First and foremost, it was easy for us to know who these people are. If you remember, they used to gather at a place called Utu in Toto Local Government Area (LGA).

“When I came here the last time, I appealed to Mr President. Then, the department of State Services (DSS), the Police, the Air Force, and the Army had a joint operation. And they were able to dislodge them.

“The Special Forces which we have in Doma, Nasarawa State, took the hostages. A lot of interrogations were done and most of them confirmed that they were indeed Boko Haram. In fact, they gave us the name of the person who used to be like the second-in-command to Shekau.

Sule, while speaking on the fate of the 900 hostages, said: “When we took the hostages, actually, we had to disperse them. A lot of them were families of different people in the country that were kidnapped. In most cases, when they kidnap women, they marry them off. We had a lot of kidnapped women that were married off.