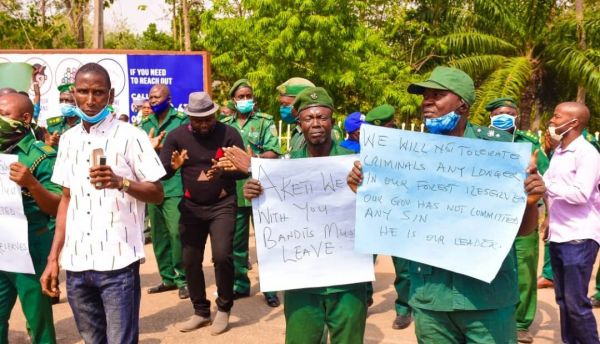 There was heavy protest in Akure, Ondo State capital, yesterday, as some residents staged a solidarity rally in support of Governor Rotimi Akeredolu’s order to herdsmen to vacate forest reserves in the state within seven days.

Some commercial drivers, members of the Nigeria Forest Services known as forest guards, farmers and traders stormed the streets carried placards urging the Ondo governor not to back down on his directive.

Chairman of National Union of Road Transport Workers, Jacob Adejo, said commercial drivers were no longer safe in the state and that his members needed  protection as herders attacked them with impunity.

The protesters said it would be wrong for the governor to rescind the order as it would expose them to attacks from persons who cared little about sanctity of human lives.

This comes as the Federal Government has continued to get more knocks over its reaction to the order by Ondo State Government to herders to vacate its reservation forests.

Some Nigerians who spoke yesterday alleged that the President Muhammadu Buhari-led administration was bias and not sincere in its dealings with Nigerians.

Among those who knocked Buhari are two Senior Advocates of Nigeria (SANs), Kunle Adegoke and Adeyinka Olumide-Fusika as well as the Aare Onakakanfo of Yorubaland, Gani Adams and a group, Yoruba Summit Group (YSG).

They all backed Akeredolu, saying he was empowered by the constitution to secure his state as the chief law officer.

Adegoke said: “Nobody has the right to enter into a forest reserve, graze there when it is not allowed, or to build there without approval. There are qualifications to the fundamental rights preserved in the constitution. Nobody can jump on any land and say ‘because I am a Nigerian, I have the right to stay anywhere I like.’ If you are a Nigerian and you wish to stay anywhere you like, you have to purchase land there. So, if we know that this is not something anybody will allow, then it would be sheer dishonesty for the Federal Government to insist that the governor must tread with caution.The governor is perfectly right in telling them to vacate the forest reserves. The notice required to get a trespasser off your land is not more than seven days.”

Olumide-Fusika held that the rights to freedom of movement and for citizens to reside in any part of the country do not vest in anyone the right to trespass on private, communal or publicly-acquired and controlled land or forest.

According to him, every land is owned by individuals, communities, villages, towns, sub-ethnic groups or the government.

He noted that the land acquired and controlled by the government, under the old Public Lands Acquisition Act or the extant Land Use Act were taken from aboriginal and indigenous communities, with compensation paid most times.

“This implies that government itself recognises that there are no ‘free, unowned, unpossessed lands’ within the boundaries of Ondo State. There are no free forest zones anywhere. For the forest reserves that are owned by the state government, people, including indigenes, may not lawfully hunt for games or carry on logging activities therein without a permit. It is criminal to do so,” he said

Adams, in a statement by his Special Assistant on Media, Kehinde Aderemi, stated that the presidency had failed to address the security situation across the country.

He described Garba Shehu’s statement as a threat to the  sanctity of the state,and a deliberate attempt to work against the state government’s interest, especially, on issue of security.

“There is no more doubt that the corporate existence of Nigeria is at its shakiest ever. Everywhere there is war, which is mostly due to the marauding, itinerant Fulani. Yet the Federal Government continues on its path of unforced errors towards a certain precipice by always siding with evil, with the murderous Fulani, who engage in kidnapping, maiming and destruction of farms.”

Gboyega Adejumo, however, faulted Federal Government’s motives behind the statement, describing Shehu as an extention of ignorance of the government he represents. A human rights organisation, International Society for Civil Liberties & Rule of Law (Intersociety) also condemned the defence of the presidency on alleged invasion of Fulani herdsmen in Ondo State forest that gave rise to quit notice by the governor.

The group said it was shocking that the Government  put in place to oversee the affairs including collective security, safety and welfare of all Nigerians and their 387 ethnic nationalities who are spiritually and morally attached to the country’s three dominant religions of Christianity, Islam and traditionalism, has dangerously converted the country into ‘jihadist Fulani Caliphate’.

A statement by its Chairman, Emeka Umeagbalasi said that the latest attacks on the Government and People of Ondo State by Buhari through his Presidential Media Aide, Garba Shehu over the defensive backing of terror jihadist activities of the Fulani Herdsmen in the State’s forests especially its Forest Reserves, are an official confirmation that the country is under jihad being executed by the government backed local and ‘imported’ Fulani ‘Janjaweeds’.