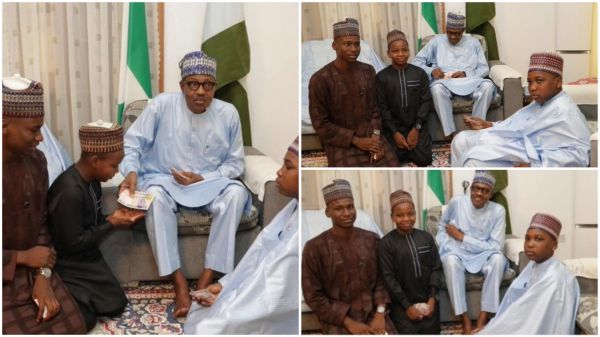 Nigerians on social media have some hilarious moments as pictures of President Muhammadu Buhari sharing money with some little kids surfaced online.

The pictures surfaced on social media amid the creation of the Stingy Men Association of Nigeria (SMAN).

The fun group was created as a form of funny revolt from men who have had enough of giving their hard-earned money to female counterparts.

Although the trend started with just a few social media users, it has now gathered momentum with several notable male personalities in the entertainment industry using their voices to amplify the existence of the association.

With President Buhari seen sharing what appears to be two pieces of N500 notes each to the kids, some Nigerians on social media assign various roles to him under the stingy men association.

"Imagine going to visit the president of your country and he gifts you N1000, what would be your reaction??"

Reacting to the tweet, @IbrahimJafr said President Buhari is the founder of SMAN.

Imagine going to visit the president of your country and he gifts you N1000, what would be your reaction??

In his own reaction, @HOOricane refers to the president as the GP (Grand Patron) of SMAN.

Buhari did these niggas dirty man

They wore their best clothes and baba gave them 1k

If I go to the villa and buhari gives me 1k

Best believe I will fight him, and na DSS and him ADC go separate us

Another Twitter user, @WizdraqueCK even went further to generate an Identity Card for President Buhari, saying he is the association's grand patron.

I no even drop pen, men run am!

Y'all meet Muhammadu Buhari the CEO of SMAN

How can a whole president be giving 500 ah noo this na casting.

"President Buhari confirms his membership with Stingy Men Association of Nigeria, SMAN as he is pictured gifting young boys #1,000"

President Buhari confirms his membership with Stingy Men Association of Nigeria, SMAN as he is pictured gifting young boys #1,000.