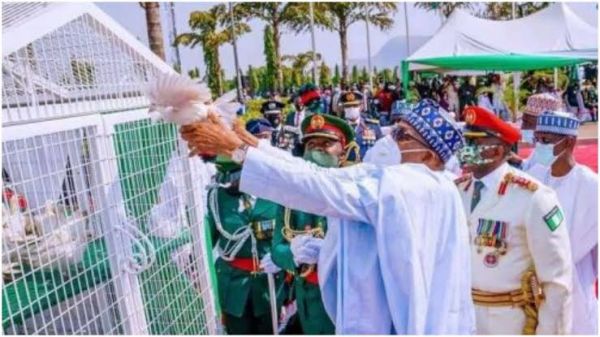 There was a mild drama at the national arcade in Abuja on Friday when some pigeons President Muhammadu Buhari released to commemorate the armed forces remembrance day refused to fly.

As a custom, Buhari opened a cage housing some pigeons and threw one of them into the air but it landed on the top of the cage and refused to fly.

Efforts of the president to make other pigeons fly did not materialise until he got visibly tired and returned to his seat while the activities continued.

The pigeons later flew when the president left.

Releasing of pigeons symbolises peace and it is a ritual to commemorate loved ones who are no more.

The development has sparked reactions on the social media. See some below:

The pigeon aired the failed ruler. Pigeon in Yoruba is called "airyele". — @mrfestusogun

To every pigeon that identified wit us (Nigerians) in our trying times. I say a big thank u for revolting. We must fix Nigeria together - @teputV

Even the pigeons are scared of the present day Nigeria - @phillipedime

The pigeons are hungry, they don't have strength to fly. - @obalisa_ade

The pigeons self dey protest against bad government - @sethKokori4

Pigeons are also asking -who ordered the massacre at tollgate - @UcheKlasique