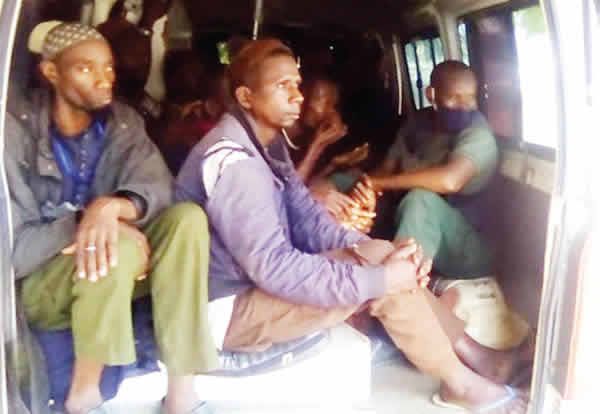 Forty-seven Fulani men armed with guns and other weapons have been arrested in Igangan, Oyo State, by men of Operation Burst, which is a joint security team of soldiers and policemen.

Our correspondent gathered that the suspects were arrested in the early hours of Sunday by the Ofiki River along the Tapa/Igangan Road in the Ibarapa North Local Government Area of the state.

Sources told our correspondent that the Fulani were allegedly invited to strike by their kinsmen following the raid carried out by the men of Oyo State Security Network Agency otherwise known as Operation Amotekun in the area on Saturday.

Amotekun said it raided the hideouts of kidnappers in the area on Saturday leading to the death of three persons, while one of its men was also injured. The security outfit said the raid was carried out in collaboration with Miyetti Allah vigilantes, hunters and others.

When contacted about the arrest, the state Police Public Relations Officer, Olugbenga Fadeyi, confirmed the arrest to our correspondent.

He said, “The arrested Fulani men have been transferred to the SCID, Iyaganku, Ibadan, for discreet investigation.

“Though it was alleged that the Fulani men claimed that they were trailing some kidnappers, who were about to collect ransom from relations of a kidnapped victim, investigation has been intensified on the matter.”

However, Coordinator of Odua People’s Congress in Oyo State, Rotimi Olumo, told our correspondent that his men in the area told him that the Operation Burst outfit arrested the suspects.

He said, “Forty-seven of them were arrested at the Ofiki River. They were caught with Dane guns and after their buses were searched, sophisticated guns, bows and arrows, charms, catapults and bullets were found.

“I heard that security men have come to arrest the Seriki Fulani. He was arrested this morning (Monday). Those arrested said they were brought from Ilorin, Iseyin and other places. They wore Vigilante Group of Nigeria uniform.”

But when contacted by our correspondent, son of the Seriki Fulani, Umoru Salisu, said the Fulani men and Amotekun had planned to carry out the raid on the criminal hideouts, but Amotekun went ahead before the men arrived.

He stated that the Fulani men, however, did not leave the area after the raid was carried out, adding that the hasty decision of Amotekun caused a rift between the agency and the Fulani men.

He added that the arrested persons even invaded the settlement of the Seriki and the residents invited the Operation Burst and policemen, who came and arrested them.

Umoru said, “We are now at the SCID in Iyaganku, Ibadan. Forty-six Fulani men, who were arrested, are here also with one of the commanders of Amotekun.

“The arrested Fulani men said they are vigilantes.”

Recall that controversies have been trailing the Amotekun raid on the hideouts. While Olayanju said his men raided kidnappers’ hideouts, Umoru said the claims were not correct.

He said, “Forty six were arrested and they have been handed over to the police.”