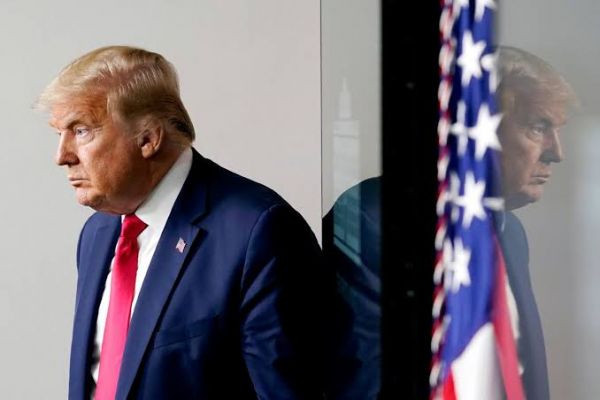 The leader of the free world, at least for the next nine days, got banned on Friday night from using his favorite form of communication whenTwitter permanently dismissed him from the platform. The questions are: How did we get here? And where do we go next?

First, let's review Twitter's decision to ban Trump in perpetuity. The last straw apparently came Friday afternoon after Trump tweeted that he won't be attending President-elect Joe Biden's inauguration. When told the news, Biden said he was in agreement with Trump.

"President Trump's statement that he will not be attending the Inauguration is being received by a number of his supporters as further confirmation that the election was not legitimate and is seen as him disavowing his previous claim made via two Tweets by his Deputy Chief of Staff, Dan Scavino, that there would be an "orderly transition" on January 20th," the company explained. [Trump's tweet on not attending] may also serve as encouragement to those potentially considering violent acts that the Inauguration would be a 'safe' target, as he will not be attending."

So, Twitter has mind-readers and code-breakers now? Because that's as big a stretch as you'll see.

Let's be clear before continuing: The president's actions in holding a rally on the day of the Electoral College certification and sending supporters over to the Capitol was beyond reckless and repugnant. After a siege that marked one of the darkest days in this country's history, resulting in the deaths of five people, Trump's 2024 prospects obviously ended, along with any hope of being regarded as a respected ex-president by the majority of the country.

Citizen Trump will be ostracized by a good chunk of the country, and that's a best-case scenario when considering criminal probes waiting for him in the state of New York. And if there weren't 10 days before the inauguration, it seems almost certain the president would be impeached and removed from office.

But if we're just talking about enforcement, Twitter's decisions on who stays and who goes is the definition of arbitrary. The supreme leader of Iran, for example, still has an account, which he uses to threaten whole countries, most notably the U.S. and Israel, on a regular basis. Iran is also the leading state sponsor of terror. Chinese government officials, who push the lie that the U.S. created and weaponized the coronavirus, also are allowed to keep their accounts.

Here at home, Louis Farrakhan's account is still alive and well. On it, he refers to Jews as rats, while white supremacist Richard Spencer also gets to tweet to his heart's content. If Twitter has standards, it sure is selective in how and to whom they're applied.

From a business perspective, banning the president has inspired top conservative voices ranging from Rush Limbaugh and Mark Levin to Dan Bongino to flee the platform.

"I'm leaving the platform permanently for Parler. I'll post my final tweet and message for Twitter tomorrow when the 12-hour lockdown ends," Bongino, who had more than 2.9 million followers, told the Washington Examiner. "F*** these a**holes."

"I have suspended my own Twitter account in protest against Twitter's fascism. I ask all my followers to join me now on Parler and Rumble," Levin wrote Friday.

Bottom line: While the First Amendment doesn't apply here regarding Trump's free speech rights since the social media companies banning him are privately held, this will hurt business in a way the company will feel. Remember, 74 million people voted for Trump. He has nearly 89 million followers on Twitter alone, which is about the equivalent of the populations of France and Australia combined. If Trump's gone, many will protest by deactivating their accounts.

So outside of creating an alias like Carlos Danger and Pierre Delecto, Trump will need to look elsewhere (or create his own platform). Parler is the obvious choice, but it's running into big problems - and again, it's thanks to the oligarchs who run Big Tech.

Apple and Google Play are now saying Parler needs to implement a full moderation plan on its site or be eliminated from the app store, which would be a huge blow to the company. But how can Apple take a stand against Parler and not call on every other publisher or platform it carries to clean up their respective comments sections, which are cesspools almost anywhere you go. Again, selective enforcement.

As for a Democratic-controlled government doing anything about Big Tech monopolies, don't hold your breath. The party and Silicon Valley are irreversibly intertwined, particularly since the 2020 presidential campaign when platforms such as Twitter and Facebook blatantly suppressed stories that could have negatively affected the Biden campaign. The most obvious was its activism around the October Hunter Biden bombshell that resulted in Twitter locking the story's publisher, the New York Post, out of its account for having the audacity to report it. Almost all donations out of Silicon Valley went to Biden, while more than a few from the industry have gone to work for the next administration.

In the end, we're heading to one big pair of safe spaces in social media and traditional media. It's tribalism on steroids, where instead of the free exchange of ideas and relatively civil debate, we're all going to live in thought silos where our existing beliefs and worldview are verified through the wonders of confirmation bias.

Social media giants may think they're making the world a better, safer place by playing the role of judge and jury in terms of who gets a voice and who doesn't. But they just made things much, much worse.