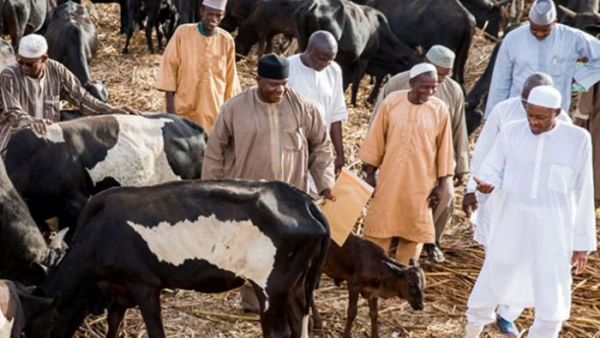 The pupils of Government Boys Science Secondary School in Kankara Local Government Area of Katsina State were abducted by gunmen who came on motorbikes around 11 pm on Friday night.

In a video posted on social media on Monday by Sahara Reporters with the time stamp December 12, 2020, however, Buhari is seen with his aides touring his ranch.

Sahara Reporters Publisher, Omoyele Sowore, said it was obvious that Buhari was not competent and it was time for him to go.

“600 Students got kidnapped in Katsina and he ignored them instead the lifeless President went to visit his cows! The moment we get it that the Buhari regime can’t be redeemed we will come to the inevitable conclusion that #Buharimustgo,” Sowore tweeted.

@TFatombi, “Cows with benefits. 600 lives meant nothing to him.”

“Where a man’s treasure is that’s where his heart is,” tweeted @AdemolaAgunbia3.

Another tweet wondered how Nigerians would endure Buhari’s incompetence for the next three years.

@iamscorefield tweeted, “Is this the president you want to rule till 2023? Remember we are still in 2020. We better focus on #BuhariMustResign not #Endsars.”

@Thedarkhorse123 said the recent abduction of schoolboys could be worse than the kidnapping of Chibok girls in 2014 if urgent action is not taken.

“It appears if we don’t do something in the next 24 hours, we may have another Chibok case in our hands. Anytime this happens and is ignored for two to three days the window closes! The state government is saying 300 (are missing) while Garba Shehu is saying 10 students. We are in a mess,” he tweeted.

“Your president visited cows but couldn't physically console victims of the latest largescale abduction. Regardless of your party affiliations, if this doesn't irk you, I hope you realise there's nothing left of your humanity and you're gradually becoming a cow yourself!”

“I actually didn't expect any miracle from someone that sent representative to the state he is currently at ?. It's pathetic to have someone like this as our leader.”

“If they become cows, maybe Bullhari will actually care about them.”

“Bubu went for holidays away from all the heartache and headache of ruling you people. Let the old man rest”

“To him, cows are more important than human life. A disaster foretold!”— FESTUS OGUN (@mrfestusogun)

“This farm is actually where he originally should have been all these years, @MBuhari has no business leading a country at his age and frame of mind. To him Nigeria presidency is just a retirement benefit to enjoy world class medical care and wealth.”

#EndBadGovernmentInNigeria This is evidenced of a leadership TOTAL Failure! #YouthEvolution MUST start floating an intelligence outfit that will salvage the lives of Nigerians else these leaders will truncate our future.”

“It's quite unfortunate indeed.

The level of insecurity ain't getting better. I'm sure if one of the students kidnapped were to be a child of one of our top politicians, they will move heaven and earth to ensure their safety. I wish I can console the parents of these kids.”— Teddy (@Teddy250730)

“Jonathan even tried visited Borno and some affected places where Boko Haram attacked. The wife even cried out in pains when chibok girls were kidnapped. But Buhari didn't even care. He doesn't even bother, the wife too doesn't care, no statement from both.”

“With all these happening I am beginning to believe what Nnamdi Kanu said about him not being alive. This is so inhumane and very insensitive. What a President. This kind of human being makes me be ashamed of being a Northerner.”

“The worse ever happened to NGR is Buhari's ruling.

The good about him, is he never hides his value for cows even at the expense of humans.#BuhariIsADisaster#buharitormentor #BuhariIsEnemyOfNGR@USinNigeria@EUinNigeria @POTUS @GarShehu

“Our children don’t deserve this. God ??. What is this? They dont even rate us to pretend like they care or even act small drama for us to show that they're doing something to secure the release of the kidnapped children. Is ok continue.”

“This is absolutely unacceptable, #KankaraStudents is just 2hrs 44 minutes drive from daura and the president is yet to visit the scene or console with the school nd parent of the abducted #KankaraBoys ,but had the time 4 cows, please don't tell me #Cowlivesmatter than human lives.”