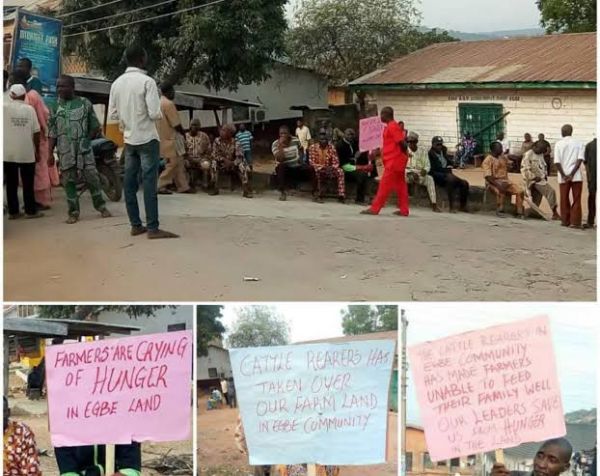 Hundreds of farmers in Egbe Community of Kogi State on Monday took to the street in protest against incessant destruction of their crops and farmlands by herdsmen.

The farmers who said they have lost crops worth millions of Naira called on the State government to intervene in their predicament.

The farmers during the peaceful protest urged the State government to call the herdsmen in the area to order to avoid another form of farmers/herdsmen clashes; as the wanton destruction of their crops waiting for harvest was enormous.

Spokesman of the farmers, Wale Oti lamented that “The way and manner in which our farms and crops waiting for harvest have been destroyed are unquantifiable.

“Majority of us farmers have been enduring incessant invasion on our farmlands for years, but the situation became worst with the warm reception by the Kogi state government to the herdsmen who came in drove to settle here.

“Majority of the farmers who had laboured on their farms since the onset of raining season, and are optimistic of having something to harvest got to their farms on Sunday morning to see their farm grazed down.

“This is why we protested to the traditional ruler of this town. Several reports have been made to the Elegbe of Egbe, Ayo Irukera to call the herdsmen to order, but we are making another one to further buttress our bitterness and pain for what the herdsmen are doing to us.”