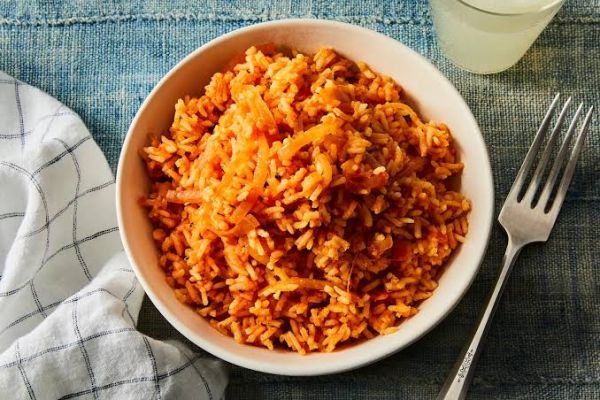 Given Nigeria’s ethnic heterogeneity, with over 300 ethnic groups scattered across its 36 states, it’s pretty difficult to settle on a national dish.

But Jollof rice—a spicy rice dish that cuts across ethnic divides—might be as close as it gets.

For one, its main ingredients—rice, groundnut oil, peppers, tomatoes, and onions—are widely consumed and available across the country. In particular, rice has evolved over the course of Nigeria’s history from being a luxury staple to being eaten across low and high-income households. Beyond the ubiquity of its ingredients, some of Jollof’s viability as Nigeria’s national dish also stems from how it has become the subject of banter and debateswith West African neighbors who also have varied versions of the dish.

Given how commonly available the ingredients for Jollof are, the dish can be used as a benchmark to illustrate food inflation realities in Africa’s most populous country. And, as it turns out, food prices have soared across Nigeria over the past year leaving citizens paying even more for food, bearing the brunt of a deteriorating economy which has now officially tipped into recession.

The situation is doubly worsened given Nigerian households already have among the highest shares of consumer expenditure on food in the world. In 2019 data from the Nigerian Bureau of Statistics (NBS) show that food took up 56.6% of consumer expenditure in Nigerian households. Latest data from NBS also show food inflation reached a 31-month high last month.

Cause, costs, and effects

Since 2016, SBM Intel, a Lagos-based market intelligence firm, has compiled the Jollof Index, which tracks the price of the dish’s main ingredients across markets in Nigeria’s six geopolitical zones. The firm’s methodology sees it track ingredient costs to put a price on how much it would cost to make a pot of Jollof to feed a household of five. “This is the one meal that is commonly cooked in all parts of the country, so it is a genuine unit of measurement that can be identified with by everyone in the country regardless of where they are,” says Cheta Nwanze, lead partner at SBM Intel.

Analysis of the index’s historical data show the national average cost of cooking a pot of Jollof for a Nigerian household has nearly doubled since July 2016. Given how essential and widely eaten Jollof and its ingredients are, it paints a difficult picture of how Nigerian households are having to spend more money on food. With nearly 90 million Nigerians living in extremely poverty—the largest global population, the unending rise of food prices also means food is increasingly out of reach for the poorest Nigerians.

In a country where so many inputs into the economy are dependent on imports (and smuggled goods), inflation hasn’t been helped by a weakening naira further exacerbated by falling global oil prices for Africa’s largest oil producer. This month, the naira, which has been dropping sharply since mid-year hit 475 naira versus the dollar on the parallel markets. At the start of the year it was at 362 naira, according to AbokiFX.

The ongoing closure of Nigeria’s land borders with Benin, Niger, and Cameroon, has been cited as one of the causes of the unfolding food crisis. With the move described by the government as necessary to stop food smuggling and protect local agricultural businesses and farmers, it follows a similar theme of protectionist policies under the president Muhammadu Buhari’s administration which has been vocal about attaining national food sufficiency.

But the obvious catch for the government is that local production still lags far behind consumption as trade realities continue to show. For instance, a 70% tariff on rice has failed to slow down imports which are essential to satisfying local demand. While the border closure policy is recent, startling food inflation is also a culmination of long-running infrastructural and supply chain gaps.

Nigeria’s history of poorly-maintained road networks mean the logistics of transporting food across the country remains inefficient while a lack of reliable power supply also means that local farmers can neither store crops or distribute them at scale. One stat to illustrate the problem is that 45% of harvested tomatoes in Nigeria go to waste. Deadly pastoral attacks in Nigeria’s middle-belt region, often referred to as Nigeria’s “food basket,” have also undermined the potential of an agriculture-powered economy over the last few years.

Despite Buhari’s hopes of Nigeria becoming a country that is food-sufficient, the stark reality is the country’s agriculture sector simply isn’t growing fast enough. In fact, the growth rate of Nigeria’s agricultural sector and crop production has declined by 42% since 2016.

The bad news is that there is no long-term respite on the cards as an expected boom in Nigeria’s population poses another reason why food sufficiency will likely remain an unattained goal for the foreseeable future: Nigeria is on pace to become the world’s third most populated country by 2050 and the second-most populated by 2100.

And with the festive Christmas season around the corner, the uptick in food prices means Nigerians are likely to experience more short-term pain if current policies remain in place. As SBM Intel predicts in its latest report, the ongoing food crisis will only “worsen in the coming months if the borders remain closed.”