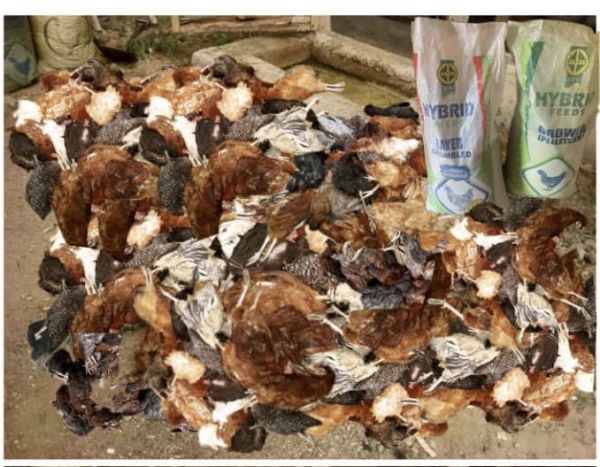 A poultry farm in Ibadan, Redi Foods, through its Managing Director, Sina Kawonise, has dragged Hybrid Feeds Limited, before an Oyo State High Court, over the poisonous poultry feeds bought from the company

The second defendant in the suit no I1602/20, Mrs. Arogundade, owner of Monatan Depot located at 12, Akanbi Shopping Complex, Iwo Road, Ibadan, who sells the products of the first defendant to customers.

Kawonise in his statement of claim, said he purchased a total of 856 (Eight Hundred and Fifty Six) (25kg) bags of chicken Hybrid Feed from the defendant totaling the sum of ₦2,337,500.00 (Two Million, Three Hundred and Thirty Seven Thousand Five Hundred Naira).

While noting that thousands of chickens in his farm died as a result of the poisonous feed he bought from the defendants, he lamented that all efforts made to be compensated for his loss due to the poisonous feed proved abortive, despite evidence from government accredited laboratory which confirmed that the chickens were indeed poisoned by the Hybrid feed.

He also asked for general and exemplary damages totaling ₦5,000,000.00 (Five Million Naira) for the untowards hardships caused by the 1st and 2nd defendants’ unholy acts by selling poisonous feed to his client to feed his chickens which resulted to the chickens’ mortalities and thereby causing enormous financial losses to him.

Salau said, "We are in Court today because my client purchased some hybrid feed from the defendant. The feeds were poisonous and killed the birds in his farm. We have written to them; initially they were begging but, when we saw that they were not forthcoming, we then instituted a Court action.

"My client is demanding for the amount lost because of the unfortunate incident. My lord, my client spent money on drugs, he consulted some veterinary doctors, among others. That is what we are claiming."

The presiding judge, Ishola, after listening to both Salau and counsel to the defendant, Mrs Seun Akande, adjourned the case till December 15 for pre-trial conference while also awarding N5,000 in favour of the claimant, Redi Foods.