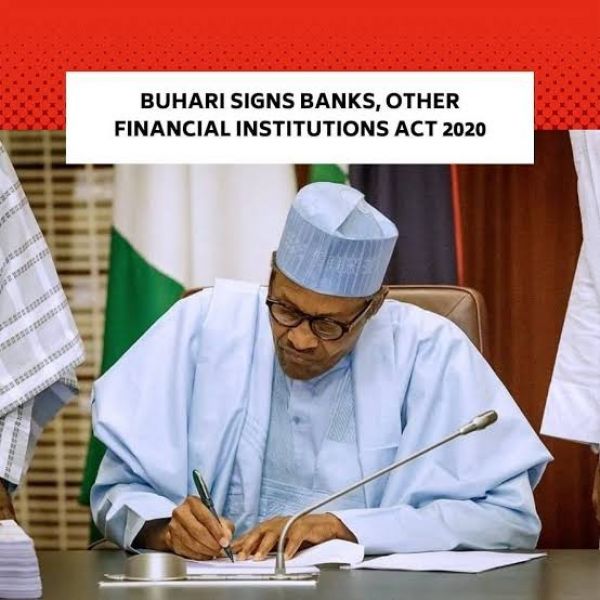 Nigeria has passed a law that will create a new resolution fund to support failing or distressed lenders and will get commercial banks to help pay for it.

The Banks and Other Financial Institutions Act 2020 was signed by President Muhammadu Buhari on Friday, and is in response to developments in the financial sector over the past 20 years.

Under the new law, the central bank will invest 10 billion naira ($26.3 million) while the Nigerian deposit insurer NDIC will contribute 4 billion naira.

Commercial banks and other lenders will pay annually 10 basis points of their total assets into the fund. Lenders will not be allowed to pay dividends if they fail to contribute, according to the law’s provisions.

The central bank will determine the start date of the new fund.

Nigeria set up Asset Management Corporation of Nigeria (AMCON) in 2010 to help stabilise the banking sector after a $4 billion bailout of eight lenders in 2009. Prior to that, distressed banks were left to fail while the NDIC stepped in to redeem deposits.

AMCON, due to be wound up in 2023, has acquired a total of 3.7 trillion naira in bad loans from 22 lenders and has recovered more than 1 trillion naira. It owes 4 trillion naira to the central bank, its guarantor.

The new law grants more powers to the central bank in managing any crisis. The regulator can step in where a lender is unable to meet its obligation or becomes insolvent. It can transfer the assets of a failed lender to new purchasers.

It can also acquire shares in a distressed bank where the central bank has guaranteed it against failing and dispose of the equity at a later date, according to the new law.