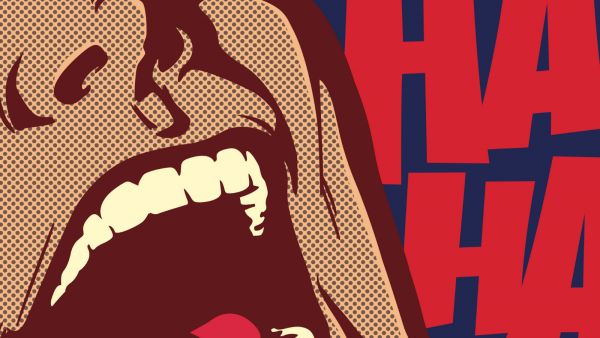 In art, a morbid sensibility is often meant to indicate depth on behalf of the creator. For patrons, the same is often perceived as anti-social.

The research literature is a little more nuanced, often suggesting that it’s more than possible for healthy subjects to appreciate both the humor and seriousness of unpleasant outcomes. This capacity may even be more common among the highly intelligent.

According to a new study published in the journal Cognitive Processing, compartmentalizing different aspects of “black humor” requires advanced cognitive and emotional development.

Every time we laugh at something disturbing, like an octogenarian slipping on black ice, the Zapruder film set to Benny Hill music, or Roger Ebert reviewing the film, Jaws our brains are actually completing a series of demanding tasks in real-time.

Consistently, the participants analyzed for the new paper who evidenced a dark sense of humor were associated with superior intellect, mood regulation, and reduced aggressiveness.

More directly, the study sample was tasked with rating 12 dark humor cartoons before sharing their thoughts on them with their fellow participants. Emotional intelligence was subsequently assessed via three principal factors: comprehension, mood disturbance, and aggression.

Those who understood and enjoyed the dark cartoons displayed low aggression and mood disturbance in addition to demonstrating high comprehension skills.

Findings like these have been uncovered in independently conducted studies of the past. Each weakens the idea that what we find humorous directly correlates with our values and ethics. This of course can be true but not reliably in the way that’s it meant to.

Sometimes horrific things are designed to be funny to the morally sound. The reason is required to distinguish between the two i.e Robert Downey Jr. donning black face at the expense of the haughty actor type vs. your buddy Dave donning black face cause Halloween party.

“It can be hypothesized that these cognitive and emotional demands directly influence the mental operations underlying humor processing as they lead to an increased or decreased information-processing capacity but also facilitate the adapting of humor processing strategies in a quick and flexible way as humor processing is dependent on the content and structure of a joke,” the authors concluded.